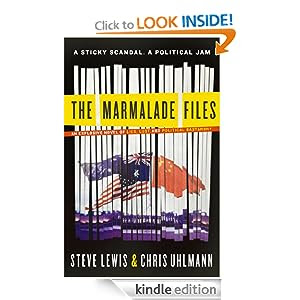 Greetings from ANU University House at the Australian National University, where journalists Steve Lewis and Chris Uhlmann are in conversation with Andrew Hughes, ANU political marketing researcher. Steve and Chris are discussing how much of their political satire The Marmalade Files

One of the people present mentioned that negotiations were almost complete to produce a TV series based on the Marmalade Files, set in Canberra.

Also it was mentioned that research at ANU has just conducted, involved attaching electrodes to voters to measure their emotional response to political advertising. The research is yet to be published, but preliminary results indicate that Bob Katter rated well, whereas Julia Gillard rated negatively, even on what was intended as a positive advertisement.
Posted by Tom Worthington at 6:41 PM