Fridges smaller inside to increase efficiency 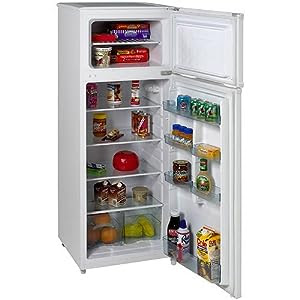 This is to suggest smaller fridges be built in larger cabinets, resulting in a 25% reduction in electricity use and a lower cost appliance.

The Australian and US governments run schemes to rate the efficiency of appliances, such as refrigerators. The more stars on the label, the less electricity used. But these ratings are relative to other appliances of a similar capacity. So a smaller, less efficient fridge may use less electricity, than a large more efficient one.

Human nature, and the market pressure in home design, results in kitchens having large spaces reserved for the fridge. Even my modest one bedroom "smart apartment" has a space for a 410 litre (14.4 cubic foot) fridge, far larger than needed for one or two people. I bought the smallest fridge I could get which had a separate freezer compartment. This was an "apartment refrigerator" of 212 litres (about 7.5 cubic feet). It looked silly in the large space, so I built a cupboard around it, to fill up the space (leaving recommended gap between fridge and walls).

However, a better alternative would be a small capacity fridge which is larger on the outside. The extra space between the outer and inner walls could be filled with more insulation. This would make the fridge more efficient, without greatly increasing the cost.

One simple way for a manufacturer to make a small capacity big fridge would be to use the outer casing and door of a large capacity fridge, with the inner case, shelves and motor of a smaller unit. Using the outer case of a 300 litre fridge with an inner capacity of 200 litres would allow the insulation to be tripled in thickness.

As well as being more efficient due to more insulation, the big-small fridge would use less power than a large unit, simply because it was smaller, having less volume to cool.

As an example, the WHIRLPOOL WRI21X 212 litre fridge uses 415 kWh/annum and has 1.5 stars on the Austrlaian Energy Rating Scheme. The WHIRLPOOL WRID41T has a higher 2.5 star energy efficiency rating, but uses 465 kWh/annum. So the more efficient fridge uses 12% more energy than the smaller model. With insulation three times as thick it should be feasible to make the smaller fridge 25% more efficient than the larger model.

According to a report from 1993, Sanyo produced a prototype fridge with insulation 2.4 in. (6 cm) thick (twice as think as the standard model) and found a 21 to 28% energy saving.

A big-small fridge would be appeal to the customer, as they would be getting more bulk of fridge for their money, as well as a more efficient unit. A 410 litre fridge costs about 75% more than a 212 litre model. So a 212 litre unit in a case as big as a 410 litre unit could be priced one third higher than a regular unit, but still look cheap compared to the bigger model.
Posted by Tom Worthington at 9:24 PM