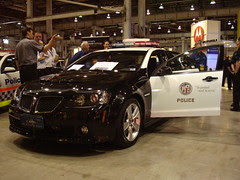 According to media reports from the the Frankfurt motor show General Motors is planning to sell Australian made Commodore cars to US law enforcement agencies.

In March when speaking at a public safety communications conference in Sydney, I tried out several prototype police cars. One was a Los Angeles Police Department (LAPD) squad car (LAPD officers were speaking at the conference). 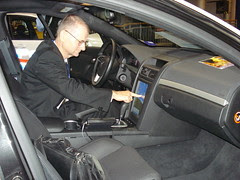 The vehicle was fitted with a large portrait format touch screen in the centre console, replacing the clutter of controls common in police vehicles. The Commodore is a large vehicle, allowing room for the equipment carried in police cars. There was also an upgraded electrical supply fitted.

While I only got to sit in the stationary LAPD car, I did have a ride in the back of one of the unmarked cars. This was fitted with discrete LED red and blue lights and also had recharging stations for police torches in the back. In place of the touch screen this car had a compact keyboard in a holster on the side of the transmission tunnel. The officer in the passenger seat could pull the keyboard out of the holster and put it on their lap, using the console mounted screen for looking up the police database.

The LAPD prototype was based on the US export version of the Holden commodore. The vehicle was branded as a GM Pontiac G8 for the US market. This was dropped after GM's financial difficulties. But the Commodore is still engineered for construction in left hand drive for the US market. As an example, the instrument cluster for the driver's side of the car is designed to be swapped with the glove box on the passenger's side. Also the handbrake on the driver's side of the transmission tunnel is swapped with a grab handle on the passenger's side. This would allow a small number to be made for US police use.
Posted by Tom Worthington at 8:02 AM