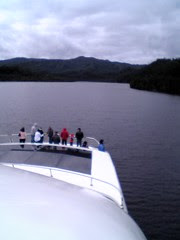 The day after a ride on the West Coast Wilderness Railway it was time for a cruse from Strahan (Tasmania), up the Gordon River. 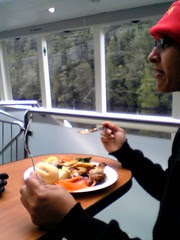 The Lady Jane Franklin II, cruse ship is part of the Pure Tasmania tourism conglomerate, who also run the tourist railway, casinos and resorts. This is an aluminium 32 m catamaran built by Richardson Devine Marine in Hobart and designed by Crowther Design Sydney (now merged with Tasmania's Incat, into Incat Crowther), with interior design by Spear Green Design. With a capacity for 228 passengers, this is a very large and very comfortable ship. 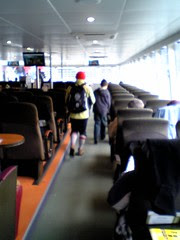 The rival World Heritage Cruises run a similar cruse using a very similar ship. Lonely Planet recommend this cruse and you can get a YHA discount. I didn't realise this at the time and book with Pure Tasmania, but do not regret it as the tour was good. WHC have a very poor web site compared to PT, making it very difficult to find any information about their tours. 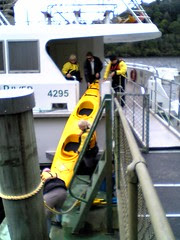 There are three classes of seating on the ship: the upper deck has the premium class, with wine supplied, the window seats on the lower deck are second class and third class are termed "atrium" away from the windows. While the cheapest seats, the atrium area at the front still provides a good view, with large windows each side, out the front, and through a glass roof. There is an outdoor viewing area at the bow and stern, open apart from when the ship is docking. At more than 30 knots, standing on the bow while approaching the harbour entrance between two rocky outcrops of "Hells Gate" was an exhilarating experience. 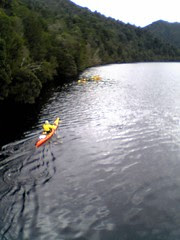 The ship tours Macquarie Harbour. The environmental cause adopted by the ship is the endangered Orange Bellied Parrot. For those wanting to see the wildlife closer up, there are kayak tours from the ship. For the less adventitious, there is a short board walk into the forest while the kayaks are launched.

The ship is equipped with LCD displays similar to those in aircraft with a moving map showing the location and orientation of the vessel. We started at 42 degrees 9.207 minutes South, 145 degrees 19.745 minutes East. The harbour is the second largest in the world. Much of the year the top few m of water is fresh, with a brown colour of tannin from the roots of native grasses. 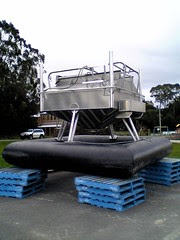 The harbour is used for salmon and trout farming. It would be interesting to see if the tannin in the water increases the anti-oxidant levels of the fish. Some rivers of the harbour are contaminated by mining with heavy metals, but the water is diluted with other fresh and salt water.

Atlantic salmon and rainbow trout are farmed in floating nets. A black polythene tube, looking like a giant bicycle inner tube, floats on the surface holding the net in place. A water cannon is used to fire the fish food across the floating pen.

The tour visits the southern end of the Tasmanian world heritage area, which extends north to Cradle Mountain. The tour guide was proud to point out that the area meets 7 out of ten of the criteria for world heritage areas, equal first to one in China. The area has significant natural heritage and cultural aspects. Some of the reasons for listing are nothing to be proud of, such as the existence of endangered species and the indigenous cultural remains of the people who were driven out of the area. 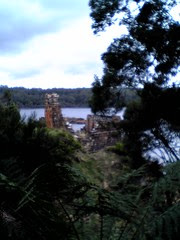 Patricio Silvia tour guide on Sarah Island also performs in the play "The Ship that Never Was" by Richard Davey. The play is performed in Strahan by the Round Earth Company and is published as a graphic novel. The play was first performed in 1984 and has been running since, including performances on Sahara Island. It tells the story of convicts who take over a ship on the island and sail to Chile. The theatre company have taken a break from performances to visit Chile (and thus delay their attempt to beat Christie's "The Mouse Trap" for the number of performances of a play). 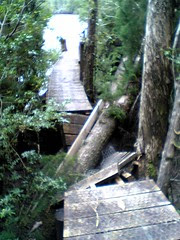 This week the movie Van Dieman's Land (by Jonathan Auf Der Heide and Oscar Redding) opened in Australian cinemas. It tells the story of the escape of Alexander Pearce from the penal colony at Macquarie Harbour. While the landscape is majestic when seen from the comfort of a luxury ship, close up it can be far less comfortable. A reminder of this was the sight of a Huon Pine crushing one of the board walks on the Gordon River. Beneath the path is mud, lots of mud. The tree did not break suddenly, instead it gradually lowered itself to the ground through the mud. The trees use this as a means of prorogation. The result is a dense tangle of vegetation and mud which is very difficult to travel through. 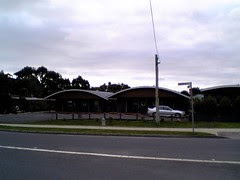 Tasmania's past shows up in other ways for the observant. Tasmania has a mining tradition. Part of that tradition is temporary miner's huts, called "Dongas". The modern version of these are sophisticated prefabricated and modular buildings (I suggested they be used for classrooms). In Strahan, after the cruse, I noticed on holiday village "Strahan Bungalows", which appeared to be made from these modules, probably by Statewide Constructions.
Posted by Tom Worthington at 9:02 AM