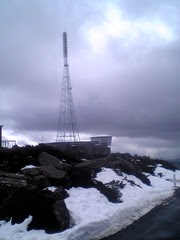 From 4 to 12 September I had a holiday in Tasmania. Normally I would blog as I went along, but was a bit busy this time and had limited Internet access and so am just catching up. The trip started in Hobart, Tasmania's capital city. When visiting Tasmania, you should bring warm, waterproof clothing. This applies even if you are only intending to visit the city. The first thing my host did was take me on a hike up Mount Wellington, which is covered in snow at this time of year.

Accommodation
Montgomery's YHA turned out to be very well located in the Hobart CBD, close to the tourist area around the waterfront. The accommodation is basic. The rooms on the street side of the building are noisy due to traffic. The rooms above the bar of the hotel are very noisy on Friday and Saturday nights (I have suggested the windows be double glazed).

The Hobart waterfront is only a few block from the city centre. This is still a working port and you can see icebreakers, such as Aurora Australis of the Australian Antarctic Division, between double deck tour buses and cruse boats. 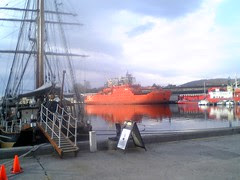 There are also several square rigged replica sailing ships. On a previous trip I found USAV Spearhead (TSV-1X), an experimental US warship, at the wharf. 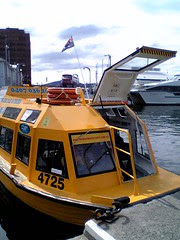 Hobart people appear to have not yet got over the collapse of the Tasman Bridge in 1975. The bus driver on the way from the airport mentioned it, just as the bus reached the span which had collapsed into the river, killing 12 people. The water taxi driver mentioned it, as the taxi headed for one of the pylons. 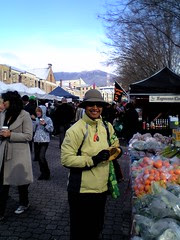 Salamanca Place markets operate on Saturday morning, just behind where the icebreaker is docked. It is best to arrive early, around 8:30 am when the markets officially open. There is fresh produce, leather and wood handicrafts. On this occasion I spotted one of the stars of the ABC Collectors TV program, which is produced in Hobart, so I guess there are some collectables.

There were numerous leather goods stands. Just to make their jobs more difficult I went around asking for a leather bag to hold a 10.5 inch netbook computer, about the size of an A4 pad. In 2008 I purchased a bag for my 12 inch laptop in Athens, near the Acropolis, but this is a bit big for the new netbook. None had one suitable, so this seems a gap in the market (Henk Berg Leather had some which were a bit big).

The snow covered top of Mount Wellington is visible above the colonial sandstone buildings which line the markets, making a dramatic setting. 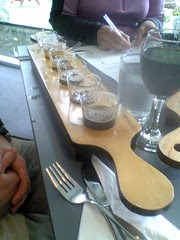 Just outside Hobart on the way to Mount Wellington, is the Cascade Brewery. This has an excellent visitors centre, featuring light lunches and beer tasting. The highlight is the beer tasting paddle. This is a wooden board, with holes to hold several small glasses of beer. The taster is challenged to name the beers presented, with a souvenir cap as a prize. On the board were: Cascade Blond (brewed with wheat), Cascade Green (not green in colour, it is claimed to be Australia's first 100% carbon offset beer), Cascade Pale Ale, Cascade Draft, Cascade First Harvest (made with first harvest hops from the Derwent Valley near Hobart) and Cascade Stout. My favorite was the Blond. 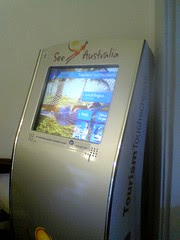 In the foyer of the visitors centre I noticed a "See Australia" tourism touch screen electronic kiosk from Datatrax. Unlike many such devices I have seen, this one appeared to be fully functional.

Tarraleah
If you want to get away from it all, you can in Tasmania. My Vodafone mobile phone was out of range, about 40 km west of Hobart and was not usable again for the next week. Heading west from Hobart up the Derwent Valley are trout hatcheries and picturesque hop farms (hops feature on the Tasmania coat of arms). 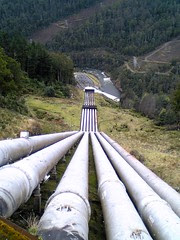 Further up into the highlands is Tarraleah. This town was built for hydro-electric construction workers and is now a tourist resort with an arts and craft feel to it. Next to the main building is a dizzy descent to the river below, down which run six huge water pipes ("Penstocks") to the hydro-electric power stations below.
Posted by Tom Worthington at 4:04 PM