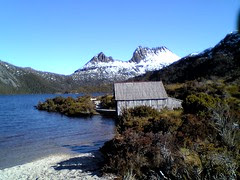 After a Gordon River Cruse and a ride on the West Coast Wilderness Railway it was time to drive north east across Tasmania to Cradle Mountain. This is in the northern end of the same world heritage area which I visited at Strahan. Dove Lake was a surprise, with breathtaking snow covered alpine vistas. Even direction I pointed the camera there was a picture-postcard scene, of rugged peaks covered in snow, crystal clear lakes, mossy rocks and stunted trees like a Japanese bonsai, rough shacks of weathered local wood and cute little marsupials hopping from rock to rock. 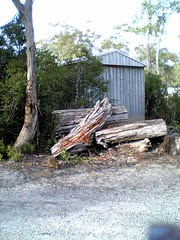 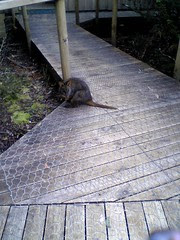 Cradle Mountain Backpackers YHA is located opposite the Cradle Mountain Transit Terminal outside the Cradle Mountain-Lake St Clair National Park entrance. Due to the pressure of tourism, visitors are discouraged from bringing their cars into the park. There is only limited parking in the park with narrow roads having many one way sections. Visitors can park at the transit centre and take a suttle bus into the park (cost included in some of the National Parks Passes). The YHA is located at the back of a caravan park and is run from the caravan park office. The cabins are set between the trees, with the wildlife coming right in amongst the buildings (you need to make sure you close the door or they will be in with you). The accommodation is clean, warm and comfortable. There is a small shop and free Internet access at the caravan park office. 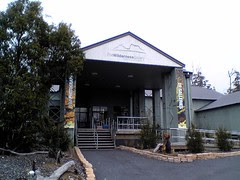 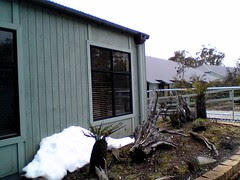 In addition there are several upmarket resorts near the park entrance, particularly Cradle Mountain Chateau, run by the same Pure Tasmania group which runs the railway and cruses at Strahan. 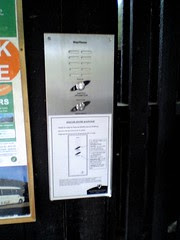 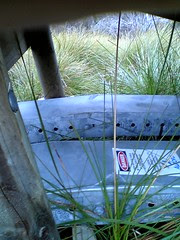 A point of confusion is that the transit centre is separate from the park visitors centre, which is right at the park entrance. Both the transit centre and the visitors centre have gift shops and information displays. There are some short walks around the visitors centre. The visitors centre is not always staffed (visitors are still obliged to pay an entry fee). There are two push buttons at the centre for contacting the shuttle bus or summoning emergency assistance (this appears to be the award winning "Telstra Wayphone"). Also there are books for visitors to record their arrival and departure for safety. All visitors are encouraged to log in and out, even for short walks. 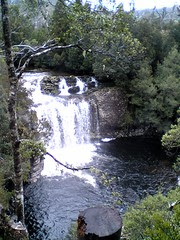 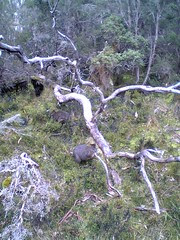 The board walks in the park are extensive. This is because the ground, which is wet for much of the year, is very fragile and in many places is impassable due to the thick mud. The main board walks from the visitors centre into the park carries power cables under it and may one day form part of the National Broadband Network.

It is about ten kilometres from the park entrance to Dove Lake, the most accessible of the scenic vistas. At the lake there is a small car park and a shelter, with another log book for visitors. This is the furtherer the shuttle bus goes into the park. 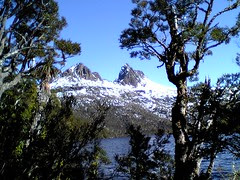 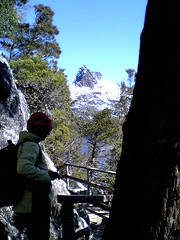 From this point for the next two and a half hours on a quick walk around the lake I was unable to stop marvelling at the view, which is unlike anything I have seen before in Australia. The views look like something from a picture postcard and are almost painfully wonderful. Around each corner of the walk around the lake there seems to be an even more spectacular view. 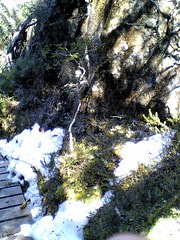 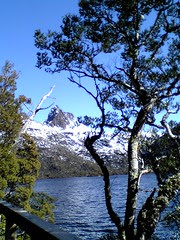 The boathouse at the water's edge, made from local timber now weathered to a lustrous grey, appears suspiciously like it was build for no other reason than to enhance the scene. The snow on the lichen covered rocks appears as though it has been carefully arranged by a landscape artist to enhance the view between the gnarled trees to the distant peaks.

Perhaps if this was Japan or China, it would not seem so remarkable. But Australia is usually a land of large flat open plains and animals you see fleetingly after dark. Here were the wildlife was standing around waiting for me to photograph, with lakes and snow peaks behind.
Posted by Tom Worthington at 6:14 PM