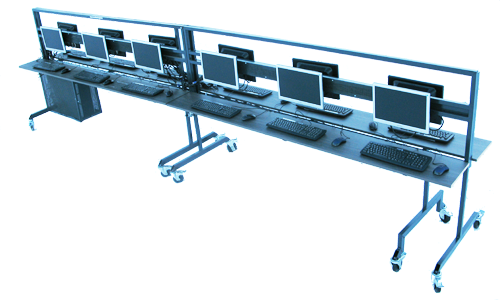 The "Multiseat" Computer is an interesting approach to green ICT. Up to 12 users can share one computer, using only a claimed 410Watts. The system runs Debian or Ubuntu with common open source applications, such as Firefox and Openoffice. The system works by inserting pci-e video cards and extra Usb interfaces into one PC box. All the users share the single PC.

However, there are still problems with the arrangement. You can't have a very long cable run to the screens and you end up with a thick bundle of cables. It should be noted that the cables have been carefully hidden under desks in the Multiseat product photos. In addition, like any multi-user computer, if the central unit stops, all the screens stop working.

Also the cost of thin client computers has come down to the point where they may be cheaper to buy than the long video cables needed for the Multiseat. However, for a small set-up, with four screens, the Multiseat could be very effective.

A few decades ago such systems were sold with patched versions of Microsoft Windows. This is much easier to do with Linux, as it is a multiuser operating system. Also the use of USB keyboards and Mice makes it easier. There appear to be some Windows based units such as the Multi-User PC, still offered. There are also systems where a whole computer with processor, is placed on a board to insert into a PC.
Posted by Tom Worthington at 9:53 AM