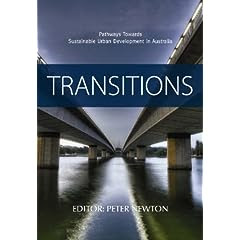 Transitions: Pathways Towards Sustainable Urban Development in Australia is a collection of 45 articles edited by Peter Newton and published by CSIRO. I was disappointed to not find any mention of the role of computers and telecommunications (ICT) in making a more sustainable urban environment. The Climate Group estimate that ICT could produce a 15% emissions reduction through measures such as better control of motor systems, logistics, buildings and electricity grids.
It is also disappointing to see that CSIRO have held up dissemination of the information in the book and increased its carbon footprint by only offering it in printed format. The book is not offered in electronic format and so will contribute to the greenhouse effect by way of the need to produce and transport paper copies. Readers will have to wait for these paper copies to be delivered and pay an excessive price for the out of date information they contain.

Formidable problems confront Australia and its human settlements: the mega-metro regions, major and provincial cities, coastal, rural and remote towns. The key drivers of change and major urban vulnerabilities have been clearly identified in the 2006 State of Environment Report: Human Settlements as well as several other national-level reports. They involve the critical domains
of: water, energy, waste streams and transport. Urban development will be an explicit focus for the book. 2006/07 marks the year in which most of the world’s population will live in urban compared to rural environments—one of the key global transitions. Australia was among the first countries to make this transition.
As Newton has remarked: “Human Settlements are where all Australians live, where 95% work, and where over 90% of the nations GDP is generated. Their design, planning, construction and operation are fundamental to the productivity and competitiveness of the economy, the quality of life of all citizens, and the ecological sustainability of the continent.”
From: Product Description, Transitions:
Pathways Towards Sustainable Urban Development in Australia, Amazon.com, 2008

Posted by Tom Worthington at 2:16 PM