Light emitting diodes (LEDs) are becoming affordable for general office, home and classroom lighting. They have about the same efficiency as compact fluorescent lamps and last much longer. There are now some LED replacement bulbs appearing to fit in ordinary light fittings. There are now also flexible strips of LEDs available which can be simply stuck to a surface. This allows more controlled lighting.

LEDs have different characteristics to incandescent and fluorescent lamps. It may be more cost effective to build the LEDs into the fitting, instead of having a replaceable lamp. A LED will last about ten years when used for 12 hours a day. This makes it feasible to dispose of the whole fitting hen the lamp fails, particularly if the fitting consists of just a thin strip of plastic.

LEDs are small sources of light, usually about 2 mm square. So it has been difficult to make high intensity LEDs similar to halogen lamps or to cover a wide area like a fluorescent tube. There are now 1 Watt and 5 Watt LEDs available, but these require elelctronic circuitry to drive them and heat sinks to cool them. Instead what has become common is to group together a large number of low power LEDs (usually .1 Watt LEDs, each 5 mm in diameter of about 3 Lumen). When collected in a circle these LEDs are used to replace a spotlight, along a bar they replace a fluorescent tube and in a hemisphere they replace an incandescent bulb. The LEDs may be mounted on an ordinary light plug, allowing replacement in standard fittings.

While this overcomes some of the limitations of LEDs, this emulation of a conventional light does not exploit their features. It should also be noted that current LEDs at5 about 50 lm/W are only half as efficient as fluorescent tube lamps (70 lm/W). When a LED is placed in a conventional housing designed for an incandescent or fluorescent light, there is a further loss of efficiency.

However, LEDs operate at a safe low voltage, with each emitting a small amount of concentrated light and minimal heat. LEDs can be automatically connected in large numbers and on flexible substrates using equipment designed for assembling elelctronic circuits. This allows lighting fixtures with inbuilt lights which will provide light over a large but precisely controlled area.

So an alternative for lighting might be to automatically assemble LEDs on sheets and strips, which could then be attached to a building. As an example strips can be stuck across a ceiling. There is no need for light fittings or wiring, the strip providing both the mounting and interconnect cable. These lights are provided in rolls and in strips with adhesive backing. The LEDs are being mass produced for backlights in LCD displays, and also as decorative undercar "neon" light strips for cars.

LED lights are not used for general office or classroom lighting due to the high levels specified in standards. This would result in a very large number of LEDs being needed. However, if the general lighting level was reduced and task lights used on desks, fewer lights could be used. As an example the Australian Standard AS 1680.2.2 - 1994 Interior lighting Part 2.2: Office and screen-based tasks specifies 300 to 400 lux Lux for task lighting and 160 lux for background illumination. However, the Australian Standard Building Construction Sites is 40 Lux for walkways and access areas and the future European standard for emergency lighting will be only 1 Lux.

A standard office has a ceiling made up of a 1200x600 mm grid. It would be convenient to attach the LED light strips to the grid (existing in-ceiling lights could be switched off but let in place). If attached along the 1200 mm sides of the grid, the lights would cover .6 of a square metre per meter. For walkway lighting at 40 Lux, the .1 Watt LEDs would need to be spaced 125 mm apart (8 lights per metre). If placed along the 600 mm sides, twice as many LEDs would be needed, about 60 mm apart. One or two strips could be used to illuminate corridors and stairways. 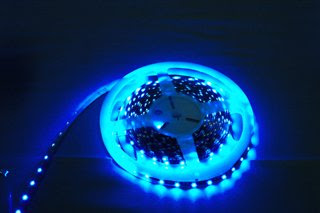 Some flexible LED tapes are already available and retails at about AU$60 per metre, for 60 LEDs consuming 4.8W total. The strip has a self adhesive backing and operates on 12vdc. The tape is also sold in 50 metre rolls and is likely to be much cheaper in that form. However, this tape has a 120 degree viewing angle, so would scatter too much light and cause glare when used on a ceiling. Also it is perhaps a little too flexible for easy installation in long strips.

Email ThisBlogThis!Share to TwitterShare to FacebookShare to Pinterest
Labels: lighting