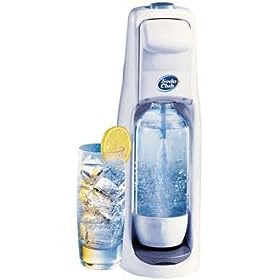 The doctor told me to give up carbonated drinks some months ago. The problem is not the carbonation, but the sugar in flavoured drinks and the salt in mineral water. Soda water seemed a safer option, but it is hard to tell if it has more salt than tap water. The supermarket had a Sodastream drink maker on special, to make soda water from ordinary tap water, so I got one of those. This will not save much money but should save hundreds of plastic bottles and their transport to the supermarket.

The Sodastream, also called a Soda Club soda maker in the USA, has a gas cylinder good for 40 to 110 liters of soda water (depending on which brochure you read). When the cylinder is empty you exchange it for a full one (unlike soda siphons which use disposable gas cartridges). The unit comes with a clear plastic one liter bottle, which looks like a regular disposable drink bottle but has much thicker walls. You fill the bottle with tap water (cool or very cold, depending on which instructions you read) and screw the bottle into the device. Pressing a button on to releases CO2 into the water with a loud rush. After a few presses a release valve makes a flatulent noise, indicating the bottle. You then unscrew the bottle, add any flavoring wanted and put the cap on.

There do not seem to be as many bubbles as with store bought soda water, but it is okay (formal academic research has been published on optimizing the bubble size and carbonation with the Sodastream). One worry is how much the CO2 gas refills will cost. According to the Soda Club web site the refills cost US$19.99 plus shipping in the USA (they are available in Australia from supermarket counters). At that rate the soda water is comparable in cost to that bought in the supermarket (about 60 cents a litre).

The soda makers are sold online by Amazon.com, but at US$99 are more than twice the price in an Australian supermarket. Replacement plastic bottles are about US$10 for two online and $AU$15 in the supermarket. This is expensive for an empty plastic bottle, but they can be used over and over again. The bottles have an expiration date on them, the one with the unit was dated October 2010, giving it about a two year lifetime. Assuming I made one bottle of soda water a day, the bottles will cost about 1 cent each.

Obviously it would be better if I gave up fizzy water and drank ordinary tap water, but I like fizzy water. Assuming the device lasts, it should save hundreds of plastic PET bottles a year, plus the enviornmental cost of them being transported to the supermarket. Each liter of water weighs a kilogram and it is a lot more efficient to transport water by pipes than in bottles in a truck.

There is an amazing number of patents for gadgets to make water fizzy. The patent for the Sodastream device is cited as a precedent in intellectual property law.

Posted by Tom Worthington at 12:17 PM

Email ThisBlogThis!Share to TwitterShare to FacebookShare to Pinterest
Labels: health