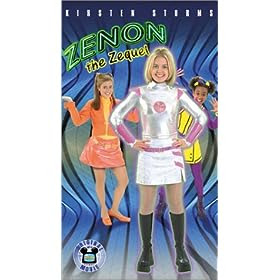 Taking a break from designing a flexible learning center, I decided to watch a TV sci-fi film. I was amused to find the curved desks I was looking at for the learning center were considered sufficiently hi-tech to be used in the film on a space station.

If you look at the space station commander's office at about one hour into Zenon: the Zequel (Disney 2001), you will see it is very similar to the "Jelly Bean" desks used at RMIT Library in Melbourne. Also the coffee table in Zenon's family room on the space station seems to be from the same furniture range.

The film was made in New Zealand, and if someone could ask set decorator Kirsty Griffin, Props Buyer Christine Mangen or Art Department Coordinator Anna Graves where they got the desks, that would be useful.

Posted by Tom Worthington at 10:05 AM