The Rosie Effect in Canberra 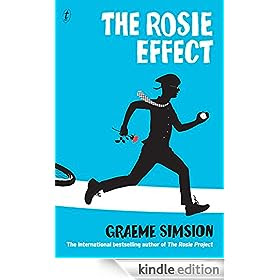 Greetings from the Australian National University in Canberra, where Graeme Simsion is talking about his new book "The Rosie Effect: A Novel

". In his introduction Colin Steele mentioned how most of the women in the audience at the talk for his previous book "The Rosie Project", were in love with the leading character in the book and projected this on to Graeme (I confess these were my comments). Graeme related story of how he went from a computer geek to a best selling author with much laughter (and some gently digs at acadmeia) along the way.

The central character on Graeme's books is Professor Don Tillman. The running joke in the books is that Don Tilman is a classic nerd, who applies the scientific method to social situations. Graeme explained that the character was based on a computer nerd and only did others ascribe this to Asperger syndrome. Graeme points out that he did not put this label on the character.

Graeme has also written the script for the film version of the Rosie Effect, to be made by Sony.

One of the unexpected laughs for the evening when Graeme was asked about how hard writing was. He replied that he had written two books about data analysis before a novel. The laugh came when he said "I realise that data analysis is not the same as romantic comedy", but then explained that writing s novel or s script is a process which requires structure and so data analysis skills apply. This is described in detail in a TEDx talk: "It's all design, from IT projects to The Rosie Project" (TEDxUniMelb, Oct 4, 2013).

I felt a little conspicuous sitting in the front row typing this blog posting, wearing a waterproof jacket (like Don Tillman).

ps: Australian now has the Autism CRC, the world’s first national, cooperative research effort focused on Autism. Perhaps Professor Don Tillman should be on the staff. ;-)
Posted by Tom Worthington at 6:14 PM