Mode of Power in International Security 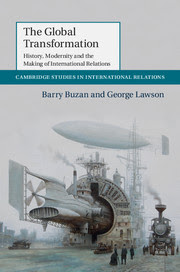 Greetings from the Strategic and Defence Studies Centre at Australian National University in Canberra, where Professor Barry Buzan is speaking on his forthcoming book "The Global Transformation: History, Modernity and the Making of International Relations

" (with George Lawson, London School of Economics, to be published by Cambridge University Press in March 2015).  Professor Buzan argues that modernity (ie technological change) from the 1840s allowed the rise of new superpowers. Countries which were unable to exploit modernity declined and other countries (including China) prospered. One example was a qualitative arms race in battleships, rendering large fleets of old warships obsolete.

Controversially, Professor Buzan argues that as the current superpowers, such as the USA, decline new ones will not be able to rise (such as China), as the technology is more widely distributed across the world. I am not sure this argument is sound, as not all countries have the resources to invest in education for their citizens to create and use the technology and may have poltical systems which do not encourage innovation to flourish. One example is that the UK's GCHQ invented public key encryption, but kept it secret, so it could not be used for e-commerce. Another example is the dilemma which China has in allowing Internet use for commerce, while preventing its use for political dissent.

With current international tensions, in the East and South China Seas  and in the Ukraine raises the question of if Professor Buzan's analysis can be applied today. One area might be the development of UAVs for warfare, which can make manned aircraft obsolete. Another is the use of the Internet for propaganda, where the citizens of a country can be directly targeted. There is also cyber-warfare. Arms races races are also currently taking pace in Asia with submarines, aircraft carriers and ballistic missiles. One revolution which much was made of a decade ago is digitisation of communications.

Professor Buzan had a gloomy conclusion that more destructive technology will be increasingly be available to smaller non-state groups, with little prospect of control. I suggest we should not give into this and there is the prospect of the rule of international law backed up by collective fire-power.

There is also a free paper from the LSE by the authors : "The global transformation: the nineteenth century and the making of modern international relations" ( Barry Buzan and George Lawson):


Unlike many other social sciences, International Relations (IR) spends relatively little time assessing the impact of the 19th century on its principal subject matter. As a result, the discipline fails to understand the ways in which a dramatic reconfiguration of power during the ‘long 19th century’ served to recast core features of international order. This paper examines the extent of this lacuna and establishes the ways in which processes of industrialization, rational state-building, and ideologies of progress served to destabilize existing forms of order and promote novel institutional formations. The changing character of organized violence is used to illustrate these changes. The paper concludes by examining how IR could be rearticulated around a more pronounced engagement with ‘the global transformation’.

Posted by Tom Worthington at 5:56 PM