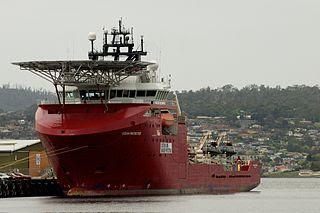 The Minister for Defence, Stephen Smith announced the purchase of the 6,500 tonne Offshore Support Vessel (OSV) MSV Skandi Bergen for $130m. Alongside the HMAS Choules , recently purchased second hand from the Royal Navy, this helps fills the gap in amphibious military transport until the first of two new Canberra class Landing Helicopter Dock (LHD) ships arrive from Spain. Australia got a good deal with both Skandi Bergen and Choules, due to the downturn in the global economy.

Skandi Bergen is sister ship to the Australian Customs Service's ACV Ocean Protector and will be transferred to Customs when the new purpose built amphibious transport ships are delivered in about three years time. The offshore support vessels are built for supporting oil rigs in harsh polar waters, and so will be useful for patrolling Australia's southern ocean, but are not designed for amphibious warfare. They have a helicopter pad, but this mounted high above the bridge and cannot be used for moving heavy cargo or vehicles, just personnel. But the ships have a useful cargo deck and crane for transshipping supplies.

Media reports indicate that the Minister for Defence rejected the option of purchasing an Australian made military transport, from Incat Tasmania or Austral WA, on advice from the Navy that these were not suitable for extended periods at sea. This is a curious decision as the purpose of a transport ship is not to spend extended periods at sea, but to get cargo from one point on shore to another as quickly as possible. This is a contentious issue in the US military, with the Army acquiring its own ships as a result. The US Army and Navy have both used high speed ships from Australian suppliers, including the Fortitude class Joint High Speed Vessel (JHSV) from Austral.
Posted by Tom Worthington at 8:40 AM