The Weir at the New Theatre Sydney

Four Irishmen and a woman go into a pub and one man says to another... It sounds like a joke and there is some humor in The Weir by Conor McPherson, currently on at the New Theatre, Newtown, Sydney. Set Designer Jessica Sinclair Martin has convincingly recreated the interior of a small Irish pub, to the point where I am sure I could smell the peat in the fireplace. Patrick Connolly was equally convincing as a wistful Irishman, complete with at times unintelligible accent (surtitles to explain of "Gardaí" might have been useful). Amanda Stephens Lee was less convincing as a grieving Dublin woman. The problem was partly with the less convincing accent, but more to do with the script, which did not provide a convincing explanation of why she was in a remote country pub with four old men. 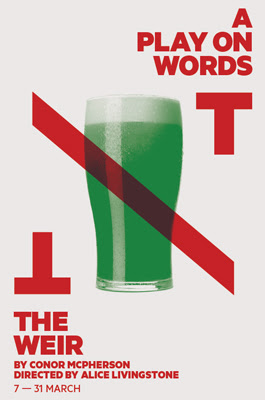 ABOUT THE SHOW
In an isolated Irish country pub, four middle-aged men spin yarns to impress a young woman visiting from Dublin.

Over pints and 'small ones', with the night closing in and a faint whiff of sexual tension in the air, what starts out as blarney and bluster soon turns dark and sinister as their tales drift into the realm of the supernatural.

Then Valerie reveals a startling story of her own.

Funny, offbeat and spellbinding, The Weir is superb theatrical storytelling in the best Irish tradition.

Posted by Tom Worthington at 9:36 AM