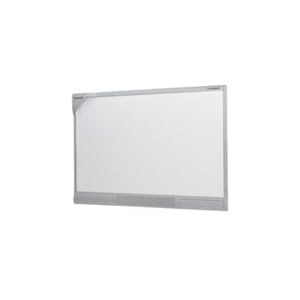 Greetings from the Australian National University in Canberra, where Taylor Hayes from Electroboard is demonstrating the use of an Interactive Whiteboard

. While these units are common in primary, secondary schools and TAFEs, they are less common at universities.

The first feature demonstrated was having the interactive whiteboard emulate an overhead projector. This does not use all the capabilities of the unit but is a good for beginners. A document or image from any application can be displayed on screen (the unit has a computer built it, in this case an Apple Mac) and then a stylus used to write over the document (there are styluses which write in different colors, emulating white-board markers). The image created, combining the background image and the digital scribble over it can be saved as an image file.

There are also "Ink Aware" applications, such as Microsoft Office, which allow the digital ink to be saved in the document as an annotation. However, it appears that the annotation is an image over a page in an application like Microsoft Word, it is not linked to words, sentences or paragraphs in the document. As a result a computer program, or a blind student, will not know what is being annotated on the page. It would be useful if the annotation could be tagged to a particular object in the document.

There is text recognition for the ink aware applications, allowing limited amounts of text to be input. But this would interrupt the free flowing intention of the interactive board.

The major limitation is that there appears to be no "ink aware" support in web browsers. As a result none of the applications I use for education, which are web based, could be used. In place of Microsoft Word, Powerpoint and PDF documents, I now use HTML web pages.

In particular it would be useful if the Learning Management System Moodle could be interfaced to the interactive whiteboard. Many educators think Moodle is just for online remote education, but it is also a powerful tool for use live in the classroom. Moodle works with smart phones and iPads, and there is no reason it would not work well with an interactive whiteboard.

The particular board being demonstrated is a Smart Technologies, wide screen unit, with a resistive surface. The board has a soft plastic sheet which when pressed detected the location of a finger or stylus. The unit appears to be "single touch" and not particularly sensitive and some touches were not reliably registered. However, Taylor pointed out that this is an old unit which ANU purchased some time ago. There are newer units with more sensitive multi-touch surfaces.

It was disappointing to find that interactive whiteboards, and their use, do not appear to have progressed significantly since I used one for a conference in 1995. The whiteboard worked very well on that occasion and I suspect it resulted in my fellow the Defence Department staff ordering them in bulk.

However, it was disappointing to find the boards can't interactive effectively with web based applications. Also it is not clear if the modes of education at university will suit the boards. It may be that university tutors and lecturers will need instruction in a new style of teaching to be able to use the equipment effectively. It will be interesting to see if tertiary level educators, who see themselves as superior, are prepared to learn how to teach from those at schools and TAFEs with experience and expertise in this.

The interactive whiteboard demonstration was followed by a short introduction to using iPads for university students. This included interfacing them to the interactive whiteboard. This is an area under very active trial at universities and in many educational institutions around the world. What is yet to be established is what is the role for such tablet computers, in the classroom, for students at home. My view is that educations should not fixate on any one platform, such as iPads, and instead look at the educational techniques which can be applied with a range of devices. As an example, Moodle and simpler software can easily be adapted to tablet computers and smart phones, as well as i-boards. These can all also be integrated into traditional university teaching techniques.
Posted by Tom Worthington at 12:33 PM

We have Smartboards all through Moray College. Being able to scribble all over the top of diagrams or slides is kind of nice, but it doesn't really get used beyond that. It's a bit annoying to have to turn on the computer, turn on the board and start up the software before you can write on the board. With old low-tech whiteboards all you had to do was find a pen. With blackboards all you needed was a piece of chalk...