Australian electronics importer Kogan have demonstrated a prototype $200 tablet computer with a 7 inch screen running Android and Ubuntu. The company is asking for input on what should be in the final design and, despite the hype around the Apple iPad, if anyone wants such a device. This "crowd sourcing" the design seems to work, I have been using the Kogan Agora Linux netbook for several months and have been impressed by how it has a low price but the features I want.

But will a product with features selected by enthusiasts like me appeal to a wider market? Is there any such market? Ruslan, the founder of the Kogan company seems sceptical and is essentially wanting the customers to convince him. The choice of a 7 inch screen looks a good one, the Apple iPad's 9 inch screen making the device too large and heavy (I have tried a mock-up iPad built by one of my ANU colleagues). This is the size of the original Asus EEE PC, which started the netbook craze. An obvious option, mentioned in the Kogan web site, is a removable keyboard, turning this into essentially a netbook with a removable keyboard. There are laptops with screen which swivel and fold to turn them into tablets.

One very good feature of the Kogan Agora is that it is easily upgraded via a large panel held on by one screw at the back. This lets you get to the expansion slots, disk drive and memory. That would be a good feature for the tablet. Another useful feature would be a USB socket in a recess in the back of the computer, large enough to hold a USB 3G modem. This would be much lower cost and more versitile than building a 3G modem into the computer.

One standards feature I would like to see on the tablet would be a VGA socket. This would allow the tablet to be docked and used with an external keyboard and screen as a desktop computer. The screen and battery could be omitted from one model of the tablet to make a $99 desktop web terminal. Many people just want a desktop computer to surf the web with and not fiddle around with loading complex software. 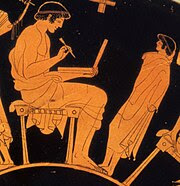 The obvious name for a Kogan table is the "kPad". But perhaps it could use of one of the names for an ancient wax tablet, such as deltos. Images of these being used in antiquity look remarkably like modern computer tablets. This seems apt as Kogan's Agora seems to be named after an ancient "place of assembly", where such tablets would be used.