Finding a green way to get to a green conference 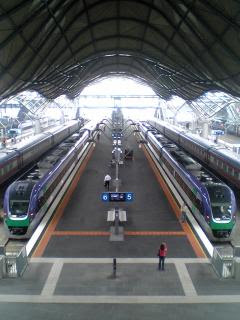 Dr Turlough Guerin, Telstra's green guru, warned me he was going to mention me in his blog about using telecommuncations to reduce greenhouse gas emmissions. This is Telstra pushing its own agenda, but I couldn't find anything to object to in what was said. Telecommunications has a lot of potential for reducing greenhouse gas emissions. A personal example, is that I have been invited to speak at the ACS Victorian Branch conference and have been using the web to work out a green way to get there.

The Victorian ACS like to have their conferences in out of the way places. Previously I did a live report from the spa at the conference in Lorne. This year the conference is at it is at Creswick, on the topic of "Greening ICT towards Sustainability" and so I am making a point of trying to get there in the greenest way possible. The conference venue suggests aircraft and private car as the transport options, which are not very green. For the Symposium on Sustainability of the Internet and ICT at University of Melbourne, I took a train from Sydney to Melbourne, then a tram to the university. The interstate train trip is so long as not to be practical for business. So I will have to fly to Melbourne.

But according to the venue web site, Creswick is only ten minutes by car from Ballarat. It would be convenient and reasonably green to get a taxi from the city to the venue (Taxis are power by LPG which is a bit better than petrol and it is a short journey). According to Vline's excellent web site, there are frequent trains from Southern Cross Station to Ballarat railway station, taking a reasonable hour and a half. There are express buses from Melbourne airport to Southern Cross Station. So it should be feasible to travel that way.

The point about this is that I can work it all out using the web, whereas I would have otherwise just accepted the default option of a hire car from the airport. Of course it would be a lot easier if the venue was to offer this transport option on their web site (or the conference presentations were by video).
Posted by Tom Worthington at 9:57 AM