Smallville but not global village 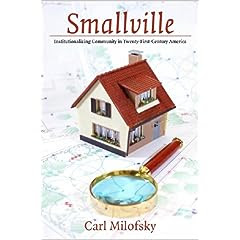 Smallville: Institutionalizing Community in Twenty-First-Century America (Civil Society: Historical and Contemporary Perspectives) by Carl Milofsky (Tufts, 2008 ISBN: 978-1584657217) provides a useful but limited view of the role of informal organisations in the community. Milofsky argues that informal local organisations are an important but neglected part of organisation theory. This is because the usual definition of what is an organisation excludes them.

The book started to get interesting when he discussed the role of local groups who are part of national organisations. I turned the page expecting to see the discussion of local groups as a part of international organisations and how the availability of the Internet had changed the role of location, but the book had ended. As Milofsky is basing his research on a small part of the USA, it may be that the people there don't interact online with the rest of the world. But it seems more likely that Milofsky's method and theory are flawed, resulting in him being unable to discern the existence of these groups all around.

The book mentions the Internet only twice and I could find no reference to the effect of the web or social networking:

Posted by Tom Worthington at 4:51 PM