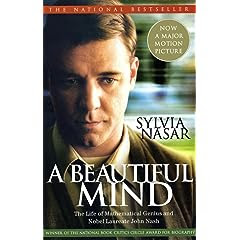 The recent showing of the film "A Beautiful Mind" prompted me to read the book it is based on "A Beautiful Mind: The Life of Mathematical Genius and Nobel Laureate John Nash " by Sylvia Nasar. The book at 459 pages, with 44 pages of end notes, and extensive bibliography and index is not a novelisation of the film but a carefully researched biography.

This is also a book about the politics of academia, covering university and researchers reaction to Nash's mental illness. One interesting part for me was the fact that it was difficult to tell Nash was ill in comparison with the odd behaviour of other mathemitical academics.

The book does a little too much hero worship with Einstien and others mentioned in respected tones. The insights into how the Nobel prize is selected and the controvesy over Nash's selection is of interest.

The book ended cusriously with the auctions for wireless spectruim in the USA in the 1990s. The claim is made that Nash's games theory guided the design of these auctions, resulting in them being succesful, both from the point of view of optimal allocation of resources for the public good and by raising billions of dollars for the US Government. The claim is also made that the previous spectrium auctions in Australian and New Zeland were failures because they were not informed by the theory.

1. on Page 375:
"... The most dramatic use of game theory is by governments from Australia to Mexico to sell scarce public resources to buyers best able to develop them. The radio spectrum, T-bills, oil leases, ..."
2. on Page 377:
"... design can minimize that problem. As Congress and the FCC inched closer to the notion of auctioning off spectrum rights, Australia and New Zealand both conducted spectrum auctions. ..."

Another useful point made is that a Nobel prize winning discovery can, at the time of discovery not look significant, even to those discovering it. With hindsight it may look obvious. Nash's game theory addressed the problem with classical economics, which assumed that there were so many players in a market that the actions of any one did not have a significant effect. In the case of the wireless spectrum auctions, there were only a few companies with the billions of dollars needed to make a bid or use the spectrum. The problem then was that each bidder needed to take into account the actions of the other bidders, who in turn would take into account the likely actions of their rivals. The Australia and NZ approach was to have a simple auction which failed to take this into account. The US approach has several rounds of auctions, allowing the bidders to assess their rivals positions. This reflected early experiments in games theory.
Posted by Tom Worthington at 8:32 AM