Hair cutting and shaving with one gadget 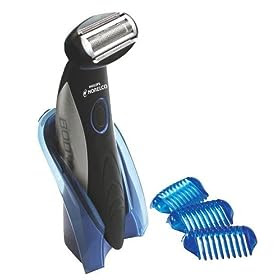 When travelling, having to carry a razor to shave and electric clippers to trim my hair is an annoyance. With their BG2020 Bodygroom Shaver Philips (Norelco) claim to have a razor which can be used for saving and hair cutting.

I have to carry two devices which essentially do the same thing: cut hair (and two battery chargers). Why can't one device be used to do both? But razors and electric clippers perform two different tasks: razors cut very short tough hairs (and collect them). Clippers cut long hair. If you don;t mind having a five-o'clock shadow look, then you can use clippers to shave. But the process is messy: you end up with hair everywhere and not very comfortable, as clippers are not designed to be pressed to the skin.

The Philips BodyGroom looks like an oscillating electric razor with a trimmer on each side of the foil. It is not a rotary razor, like the usual Philips ones. There are clip on combs for cutting hair. Unlike the Wahl All In One Rechargeable Trimmer, where the shaving head is swapped for a hair trimming one, the Philips system just has clip on combs. The same cutting mechanism is retained on the unit, when cutting short or long hair, making for fewer parts to break. 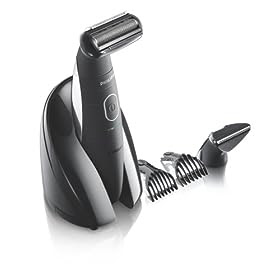 Philips also have the BG2030 Professional BodyGrooming System, which looks similar to the BG2020, but has a separate clipper head.

With all of these combination units, keep in mind that they are primiarly design for cutting "body hair" and so will not do as good a job as a specifically design razor for the face, a beard trimmer or hair clippers.

Posted by Tom Worthington at 11:48 AM

I purchased a Philips Bodygroom Shaver (TT2021 model) but found it disappointing.