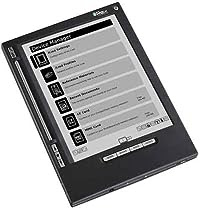 The iRex iLiad is an e-Book reader, similar to the Sony Reader, and the Amazon Kindle, with an electronic paper display and low power processor. However, like other eBook readers, the iLiad is expensive (US$699) compared to subnotebooks like the ASUS Eee PC (2 G model US$299). Underlying Linux operating system is limited::

Because of its open Linux operating system, the iLiad is able to run third party applications created for it.

Developers and users wishing to create or run third party applications can request shell access from the manufacturer. Developers have been able to improve on the devices functionality by porting viewers such as FBReader, and programs such as abiword and stardict.

Posted by Tom Worthington at 3:11 PM