Australia should invest in Underwater Uninhabited Vehicles (UUVs), commission conventionally powered submarines to carry the smaller ones, and submarine tenders to support them. The Australian Government plans to build nuclear powered submarines, with the help of the UK and the USA. That plan replaced one to to build an Attack-class submarine, as a diesel-electric variant of the French nuclear powered Barracuda-class. And the plan before that was to purchase Japanese submarines. All these plans have the problem that they are for submarines tasked to approach the enemy to carry out surveillance and attack. Small, low cost underwater drones will render such tactics a suicide mission. Instead submarines will need to stand off and launch their own surveillance and attack drones. 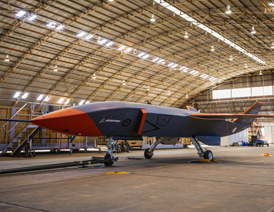 Larger UUVs (underwater drones) would be similar in concept to the Boeing Airpower Teaming System (Loyal Wingman). This is a pilot-less aircraft design to accompany aircraft with crews. It is being designed and built in partnership between US Boeing and the Australian Government. Boeing has the Orca Extra Large Unmanned Undersea Vehicle (XLUUV), based on the Echo Voyager. This is 16 m long with a range of 12,100 km. Smaller drones are more like very smart torpedoes and mines, with limited range. Small UUVs will have far smaller warheads than conventional torpedoes and mines, due to the need for more space for batteries or fuel. This necessity could be made a virtue, by providing a "less lethal" option in grey zone conflicts. UUVs could be programmed to disable a ship's propulsion, steering, or sensors, rather than sinking it. This would deny ports and shipping lanes to an enemy, with less risk of negative publicity from causalities, where the target was a warship disguised as a civilian vessel.
Strategy and tactics for the use of UUVs, could be investigated in a series of hackerthons, with military, government, academic and industry people, modeled on the Navy Warfare Innovation Workshop 2020 (NWIW).

However, converted battleships did not make ideal aircraft carriers. Their heavy guns were obsolete and so removed. They did not have optimal storage for aircraft. Similarly, the design of submarines will need to change, with the priority being UUV storage, not sensors or torpedoes. A good starting point would be a design like the Korean Dosan Ahn Changho-class KSS-III. This is the only conventionally powered submarine with a Vertical Launch System for cruise and ballistic missiles.

Australia could enhance the effective range of its submarines by building tender ships, to refuel, rearm, repair and exchange crews. The tenders could be derived on existing Australian designs of high speed warships from Austral, and Incat. The submarine tenders would rendezvous with the submarines near their area of operations, thus saving the long transit time from Australia. They could also launch and recover large UUVs, which cannot be carried on a submarine. A multi-hull tender would be able to launch UUVs from between the hulls, while underway, unobserved.
However, the key part of UUVs would be in-country manufacturing capability. This could use local flexible manufacturing, such as Core Electronics factory at Newcastle, for assembling the computer controls, and composite construction from Acheron Project Pty Ltd of Sydney (as used for James Cameron's Deepsea Challenger).

Posted by Tom Worthington at 3:54 PM