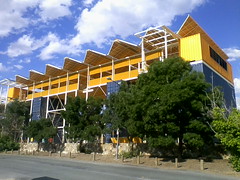 The ‘Westside @ Acton Park’ is a shipping container building in Canberra's Acton Park, designed by Cox Architecture and Murtagh Bond Engineers. This is four shipping containers high (not as tall as ANU Laurus Wing of Ursula Hall, which is six containers high). Westside is to be a cultural centre run by by Stomping Grounds Collective. Hopefully it will be more successful that the ACT Government's previous venture on this site, which was to be a futsal stadium, but was not used. 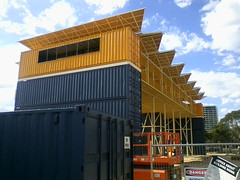 The building consists of a steel frame supporting the roof and stairs, into which shipping containers have been stacked three high. This differs from typical shipping container buildings where the containers themselves support the roof and stairs. Having a separate frame provides more flexibility in what containers can be used, as they do not have to hold up the building. This also allows the containers to be interchangeable, much like the concept (never implemented) for Le Corbusier's Unite d’Habitation. 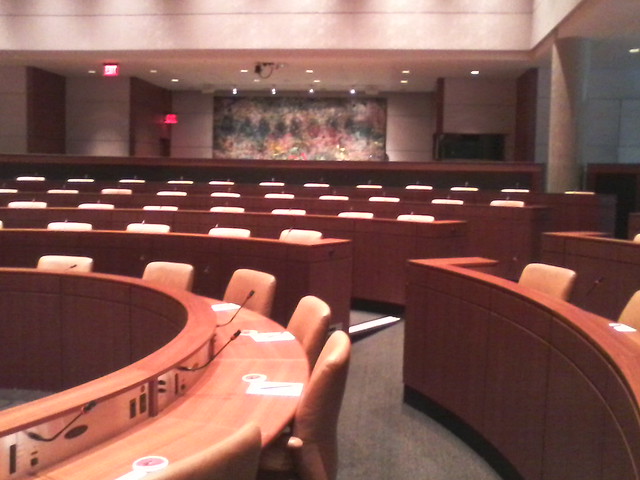 One use mooted for the convention centre was dialogue. In August I visited the Morris J Wosk Centre for Dialogue at Simon Fraser University in Vancouver.This is a purpose built room, which wile impressive, I suggest is too inflexible in design to be viable for Canberra. The dialogue room is circular with stepped seating and translation and electronic voting facilities for each seat. While excellent for its intended purpose, such a room is not suitable for conference presentations and other uses. A rectangular room with a flat floor could have temporary seating installed for this and other purposes. Delegates could now be expected to arrive with their own wifi equipped devices for translation and e-voting.