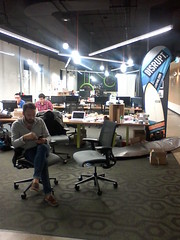 The Telstra Muru-D Start-up Accelerator hosted a Christmas party with the Sydney Educational Technology Meetup group (SydEduTech) on 19 December. This was held at Muru-d's offices in trendy Oxford St, Paddington.

Getting into the building provided difficult, as this is a working Telstra telephone exchange and was was on a heightened security state due to a recent incident in the centre of Sydney (the army base donw the road was at SAFEBASE alert CHARLIE). After having my photo id carefully checked, I was escorted to the muru-D floor, which has been converted from holding racks of telecommunication equipment to be a place for start-up companies.

Like many such co-working spaces, muru-D has a warehouse conversion aesthetic, with cable-ways still visible on the ceiling, long rows of desks in an open plan environment . There is space for presentations with bean bags and stackable cardboard stools. Unlike the average co-working space, there is a roof-top deck next to the well equipped gym and kitchen, with panoramic views of Sydney (and glimpses of Sydney harbor and the bridge).

There were a series of typical start-up[ talks from the latest batch of businesses (Telstra selects a small number to be in residence every six months). These were well presented, with the usual enthusiasm (and the usual worry about how viable they were).

As this was a joint event with SydEduTech there was an emphasis on education. Also I noticed a strong connection with Chinese business.

The vent gave me some useful ideas. From January 2015 I am taking over teaching of the Australian Computer Society's "New Technology Alignment" (NTA) on-line postgraduate course.
Posted by Tom Worthington at 10:43 AM