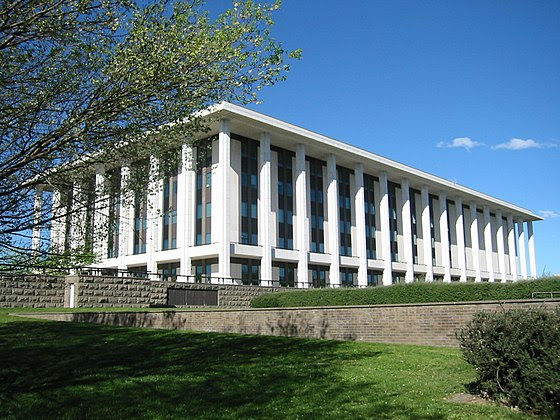 In "Religion for Atheists: A Non-believer's Guide to the Uses of Religion" (discussed on By Design, ABC Radio, 22 February 2012), Alain de Botton argues that a secular society still needs public buildings with the inspiring characteristics of places of worship. This does not seem a very profound or new idea.

A good example of a secular temple would be a great public library building, which has imposing architecture, the equivalent of priests (the librarians) a demand for silence and ritual (line up to borrow a book). An outstanding example is the National Library of Australia Building (by Bunning and Madden), which is clad in white marble, designed along the lines of an Greek temple, with the stained glass windows of a medieval church in the foyer.

Of course the idea that "religion" was something separate from everyday life is a relatively new concept and one which much of the world has not adopted. To many the idea that spiritual concepts would only apply to specialized "religious" buildings would seem odd.
Posted by Tom Worthington at 3:43 PM