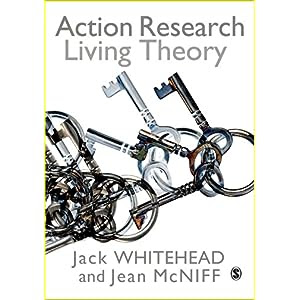 Several of the courses for the Certificate of Higher Education I am studying have touched on "Action Research" without explaining it in detail. As described it would not be regarded as "research" in the Computer Science discipline. In 2000 when relaunching the Australian Computer Journal and setting up a new conference paper series, we decided to add Practice to the title ("Research and Practice in Information Technology") so that professional practice, which did not qualify as research, could be included. Looking at my practice systematically could be a worthwhile educational exercise, I did not see how trying out something in my classroom was "research".

These issues are discussed with clarity and passion in Action Research: Living Theory

(A Jack Whitehead and Jean McNiff, 2006). Whitehead and McNiff put the case that Action Research is valid research technique, alongside those of the social and physical sciences. They claim action research as a rigorous and valid approach for a PHD thesis. What I found most useful was the explanation that Action Research was not trying to emulate social or physical science research methods, but do something different and more personal, with the researcher more involved with their subject.
After reading this book I feel I understand Action Research better. I can see its role in educational development and as an approach for scholarly discourse.

However, I am still not convinced this is equal to  conventional scientific research techniques. It is useful for a practitioner sets down an educational technique they tried, to document their progress and as an aid to other. But that is not sufficient to base a theory of education on, or to make recommendations for widespread educational practice, or the investment of large amounts of education funding. Before deciding on a theory, practice or program  I would want to see  research which involved many educators and students and which applied statistical analysis techniques with tests to see the results were not due to chance, or wishful thinking.

Hi Tom, You probably need to read something about qualitative research. While I can understand your desire for statistics etc. there's a real problem in that some things aren't amenable to quantitative measurement. If you're not careful, you end up biasing your investigation towards what you can measure rather than what's important. For physics or computer science of course there's no need, but for anything involving people, like education or psychology, there's so much happening that can't be measured, qualitative methods are essential. Cheers, Ian

> ... there's a real problem in that some things aren't amenable to quantitative measurement. ...

If we can't measure the results of what we do, then how will we know it is working or not? How will we know if a change we make to the course improves it? I don't think concentrating on what can be measured biases an investigation, although concentrating on what is easy to measure might. We can use a qualitative measure, such as what an expert thinks, but I am more comfortable if that is turned into a quantitative measure (what the average score from a large number of experts).

ps: Tell us about your lecturing in Scotland.