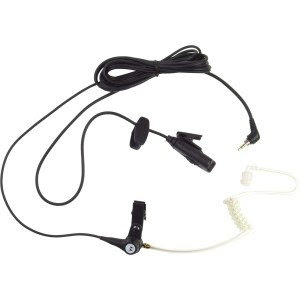 Recently I have been taking part in numerous video conferences using my laptop. These require use of a headset to get reasonable quality sound. But you look a silly on camera with a big headset on. Also headsets can be uncomfortable to wear for extended periods. I found an air-tube headset in my local electronics shop. These are also called Surveillance Headsets

(or security headsets) and are also used by TV presenters.

The surveillance headset has a soft ear plug which fits in one ear, connected to a clear plastic tube up over the ear and down the back of the neck with a curly tube. The tube ends in a clip attached to the collar. The neck clip has a wire which runs to a small box with clip to attach to your lapel, a push-to-talk (PTT) switch and microphone. This box has a second cable with a plug for the computer (some units have a separate lapel microphone).

That sounds complicated and it is a bit fiddly to put on. But once fitted, the ear-piece is very comfortable and not noticeable on camera. The unit I bought has a PTT switch. This is very handy for events with large numbers of participants where you only speak occasionally: you hold the switch to talk and so can't accidentally leave it on. Some units are designed for "VOX" so the microphone is on all the time and some have a VOX/PTT switch to select either mode. My unit has no VOX switch but I find a rubber band works fine to keep the microphone switch down for extended periods.

The tricky part is to find a surveillance headset with the plug for your computer. Most of the headsets have just one 3.5mm stereo style male plug, some have two mono 3.5mm male plugs, some a 3.5mm and a 2.5 mm plug. Most computers have two 3.5mm stereo sockets: one for the microphone and one for the earphone. 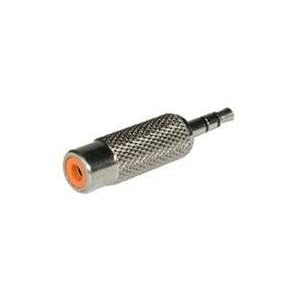 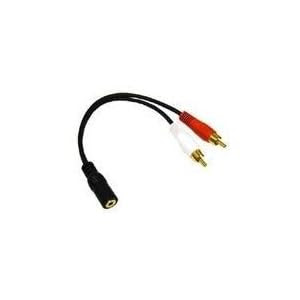 I made my own adapter cable. Otherwise you can make a connector from Cable Adapters

. For mine this would be one 3.5mm Stereo Female to Two Male RCA Y-Cable

(to split the 3.5mm stereo from the headset into two mono channels) and then two RCA Female to 3.5mm Stereo Male Adapters.

Also I found the headset works fine with my mobile phone, using a 3.5 mm to 2.5mm stereo adapter.

Posted by Tom Worthington at 6:32 PM