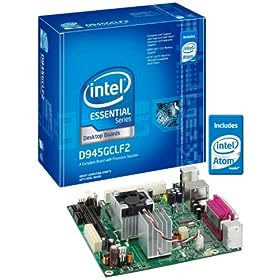 While there are ready made low power desktop computers becoming available, the article "Build your own Nettop" (Roydon Cerejo, Techtree, Jan 24, 2009 1021 hrs IST), points out that you can custom build your own. Individuals can have their local computer store put one together for them and organisations can specify such systems for bulk purchase. The Intel D945GCLF is a Mini-ITX processor board (about $US73) with the same low power Atom processor commonly used in netbooks and nettop computers. However, there now also the Intel D945GCLF2 with a dual-core Intel Atom processor for a little more (about $US92).

As well as the processor board, what also will be needed is RAM, such as the 2Gb Kingston KVR667D2N5/2G
(about $US25) and a case such as the 4BAY Desktop Blk 250W ATX12V Mitx. Roydon suggests a 80 Gb disk, but compact flash memory, as used in many netbooks, is an alternative to a hard disk. One way to do this is with a Sata Compact Flash Adapter and a 4GB Memory Card. A DVD drive could also be fitted, but most office workers will not need this.

Also, as Petersham TAFE teach their students, it is feasible to retrofit an old PC case with a low power board (and optionally flash memory). But before doing this you should check the efficiency of the existing power supply in the case, as it is likely to be much larger than needed for the low power board and also less efficient than a new one. To keep the workers happy, and the costs down, it might be worth fitting the components in a new large size PC case. This is likely to have a more efficient power supply than an old one. While most of the case will be empty space, the user will not be able to tell this from the outside and feel they are getting a full size computer, not a little toy one.

Posted by Tom Worthington at 8:01 AM