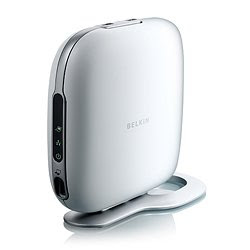 Doubling as laptop docking stations might be the "killer application" to make thin client computers popular. Belkin have released a Docking Station to connect a laptop to peripherals which, at about $US200, is comparable in price to Thin Clients. It probably is a small Linux computer programmed to be a docking station.

The Belkin High-Speed Docking Station connects to a laptop using an ExpressCard port. It provides USB, Audio In/Out, Ethernet and Video connections. Unlike docking stations made for specific models of computers, it is not just a cable adapter, the unit has its own video and Ethernet hardware. So essentially the unit is small computer programmed to relay data from the laptop (this is borne out be the difficulty some users are having getting it to work). With some reprogramming it should be possible to use it on its own as a thin client computer.

Alternatively it should be possible to program a thin client computer to display data from a laptop computer and relay keyboard and mouse input. The laptop could be connected by USB 2.0 or WiFi. The thin client would then be a docking station for the laptop, but with the advantage that it would be usable without the laptop connected.

This could provide very popular for homes and offices. The desktop computer would be replaced with a cheaper and easier to maintain thin client computer which would provide basic functions. Those who need more computing power would plug in their laptop. Others could plug in a USB flash disk, USB portable hard disk or their smartphone.