IT in Government Conference 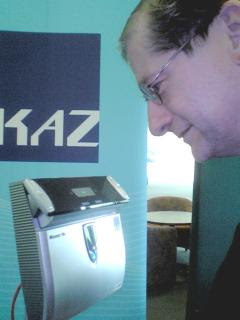 Greetings from the IT in Government conference in Canberra. One of the gadgets on display is an iris recognition system for security applications. I put my face about 30 cm from what looks like a digital camera and the system scanned the iris of my eye using a infrared.

But as well as the toys, the conference has serious sessions with Chief Information Officers (CIOs) of government agencies and industry speakers. One item in my "live" report from last year's conference, which has been in the news recently is Customs Cargo Management:

... Customs are rebuilding systems conceived in the 1960s to integrate industry and customs. At this point a theme in the day became apparent: defence, immigration and customs all have real time, sensitive systems which have to link internationally and interface securely with other organizations. The new customs system received press criticism but worked well in practice. The key issue was not the software development, but helping clients with implementing digital certificates to use the system. The system receives 85,000 incoming messages and sends 200,000 outbound per day. It uses SMTP e-mail protocol for simplicity. The system is more than 23,000 Function points in size. ...
See: "Ebusiness, Egovernment, Exports: Implementing The Customs Cargo Management Reengineering System" at: http://www.acs.org.au/act/conference/Murray.ppt

Posted by Tom Worthington at 11:59 AM