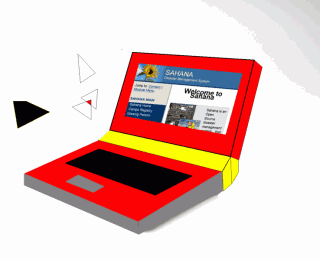 A $100 laptop computer designed for education in the developing world was displayed to the media by Nicholas Negroponte from MIT and the Secretary-General of the UN last week. The colorful hand cranked little computer looked very attractive in the TV news, but is not a reality just yet. It may never be a reality and even if these computers are made and actually work, they may not necessarily be a good idea.

The $100 laptop is an MIT Media Lab project:

The proposed $100 machine will be a Linux-based, full-color, full-screen laptop that will use innovative power (including wind-up) and will be able to do most everything except store huge amounts of data. This rugged laptop will be WiFi-enabled and have USB ports galore. Its current specifications are: 500MHz, 1GB, 1 Megapixel.

As the Media Lab points out the laptop is not yet in production and will not be available for sale, but distributed to schools under government supervision.

The Secretary-General talked at the media event, but this isn't a UN project. If you look at what he actually said, he wasn't endorsing the details of this project, but the idea of economic and social development by improving learning.

I have a few reservations about the $100 Laptop:
It isn't really isn't a laptop

If you look carefully at photos of the unit being held in the hand, it is much smaller than a laptop computer. The processor and memory specifications of the unit are lower than those of a laptop and closer to those of a PDA. The computer would be better described as a subnotebook or palmtop computer. This is a size which would suit a child and many such devices have been made and sold for educational and other purposes.

At $100 the computer will still be too expensive for many in developing countries and they could find better uses if offered the money. Even if basic needs for food and shelter are met and money can be spent on computers, there may be more realistic priorities than one per child. One computer per school or village, might be a more realistic and useful goal.

There are better things to do with the technology

Computer can be used to help with agriculture, business, civil administration, disaster management and defence, as well as education. A large scale humanitarian operation is underway in areas of Pakistan affected by earthquake. Providing children who have no shelter with laptop computers is not a priority. However, some small computers would be useful in coordinating relief operations. Recently I tested a new version of the Sahana Open Source Disaster Management System for a handheld computer.

The developing world has already designed and built better computers.

MIT's $100 Laptop does not actually exist, it is just an idea. In contrast the Simputer exists. This is an Indian designed PDA for developing countries. The Simputer uses an innovative open source hardware and software approach. A non-profit organization designed the computer and then licensed it to manufacturers. The computer runs Linux open source software, as the $100 Laptop proposes to do. Unlike the $100 Laptop, the Simputer is a commercial product and the customer can choose to buy it or spend the money on something else.

The Simputer is not perfect and doesn't seem to have been a great sales success. Perhaps the Simputer's largest problem has been in marketing it as a PDA. In comparison with conventional PDAs the Simputer looks large, cumbersome and dull. Also the Simputer lacks a keyboard. Another Indian made computer is the Mobilis. This is essentially a Simputer with a larger screen and a small rugged rubber keyboard. It is similar in concept to the $100 Laptop, but closer to reality.

The best features of the proposed $100 Laptop could be combined with those of proven computers from developing nations, to produce a real computer for education.

The strength of the $100 Laptop is in its colorful case mimicking a laptop and the powerful marketing ability of the MIT Media Lab. The weakness is in the lack of practical and proven design. At the media event the charging handle of the supposed rugged $100 computer came off in the hands of the Secretary General.

The Simputer has a design tested in use and in the market. It suffers from honesty, in describing itself as a PDA and in having a simple case which looks dull. It also suffers from having to be made from components which are available now at the price they cost now.

The result might be a computer with the internals of the Simputer and the colorful case of the MIT design (see my drawing). Unlike the MIT design, the unit would not have the charger built in and would have a rugged rubber keyboard. A separate hand cranked charger like the Freeplay unit could be used, or the new Freeplay foot powered "Weza" portable energy source shared by a school. The units would be available for sale, as well as humanitarian use (mine is shown running Sahana for a relief operation).

Posted by Tom Worthington at 10:08 AM

The Wikipedia entry "$100 laptop" has a a good overview of the project and criticisms of it.