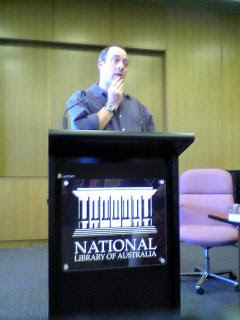 ... John Birmingham, author of "He Died with a Falafel in His Hand" , and more recently "Weapons of Choice: World War 2.1" and "Designated Targets: World War 2.2" is speaking at the National Library of Australia, in Canberra at 2pm Sunday. ...

Greetings, live via wireless Internet, from the reading room of the National Library of Australia. John Birmingham gave an entertaining and very generous talk to the friends of the library. He talked about his background, including working on security vetting at the Defence Department as well as work as a journalist. He mentioned how a few people had objected to being mentioned in the Falafel book but many more people had claimed to be in it.

At question time I asked about the electronic editions of his books. John said that they sold well in the USA, but not in Australia. Colin Steele asked a follow up question about e-books. Colin is the former Librarian at the Australian National University and ANU Emeritus Fellow, who I regularly bump into at e-publishing seminars.

What I didn't know was Colin is also a character in John Birmingham's latest book. John explained that he acknowledges people by naming characters in the books after them and gets revenge on bad reviewers in the same way. As I have written a good review, look out for Tom Worthington in charge of the USS Stradbroke Island in the next book. ;-)

ps: The NLA is giving away free wireless Internet access in the reading room (at about 256 kbps). I signed up ten minutes before John's talk. This requires first signing up as a reader and then being issued with a password. It was a lot quicker and easier than when I signed up as a reader with the British Library in London a few years ago. The catering at NLA is much better than at BL as well. ;-)
Posted by Tom Worthington at 4:19 PM

Email ThisBlogThis!Share to TwitterShare to FacebookShare to Pinterest
Labels: NLA