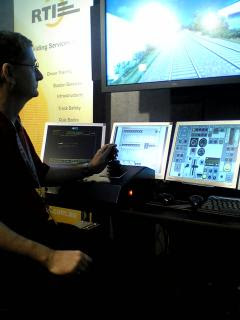 Thursday I went along to the exhibition for AusRail 2005, This is convention for the Australian rail industry. There were quite a few computer related exhibits, combining my hobby interest in trains with a professional interest in IT for large systems.

The photo shows me driving a locomotive simulator from Corys. This is used for training locomotive drivers, in much the same way aircraft simulators are used for pilots. There wasn't a full mockup of a locomotive cab, but even with a set of controls and a PC screen it was very realistic.

Ansaldo Signal had a live feed from the Train Control System they have installed in Perth. This used five LCD screen to show where each train was on the Perth network.

Motorola's demonstrated their Mobile Mesh Network Technology to transmit security video from a train. The idea with a mesh network is that any unit can be used to relay signals, removing the need for expensive base stations. The hardware used is much the same as for WiFi.

Lockheed Martin showed an Advanced Train Management System to be based on Telstra's CDMA network. This seemed odd as only a few days ago Telstra announced they were phasing out CDMA.

Last year I suggested to the NSW transport minister that some of these gadgets could be useful in accidents.

Posted by Tom Worthington at 1:50 PM