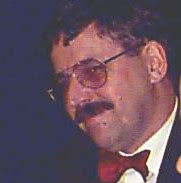 The Canberra Times announced the death of Kerry Webb, former ACT government Web architect and Director of Systems for  the National Library of Australia, 7 November 2015.

Kerry was central to getting the Australian Government on the web in the mid 1990s. He was a member of the informal "Internet Conspiracy" of government, academic and industry people who helped formulate Australian Internet policy. His vision is set out in "Provision of Australian Government Information on the Internet" (1996). Kerry was regular contributor to the "Internet Reality Check", held in Canberra during the middle to late 1990s, with Tony Barry and Eric Wainwright.

A contributor to his profession, Kerry wrote the "Webb's web" column in the Australian Library and Information Association magazine "Incite" from January 2005 to December 2012. Also he co-authored with Christine Frey (Goodacre) "Microcomputers in Australian libraries" (ALIA, 1991) and "Automating a small library" (ALIA, 1992). The NLA also has the sound recording by Kerry "Web based tools for libraries" (2008).

A long term contributor to the Link list on Australian network policy and communications, Kerry's first post was "Australian Government Web Page", 12 Apr 1995. There are 159 posts by, or mentioning, him.


I fondly remember Kerry Webb's bemused jibes at my presentations on matters to do with the Internet and self-promotion therein. I will miss his shouting "Bingo" whenever I mentioned the "USS Blue Ridge" in a talk. ;-)
Posted by Tom Worthington at 3:29 PM

Thanks for noting this. As I live in Melbourne had not seen any notice about it. Knew Kerry through his attendance at many VALA conference.