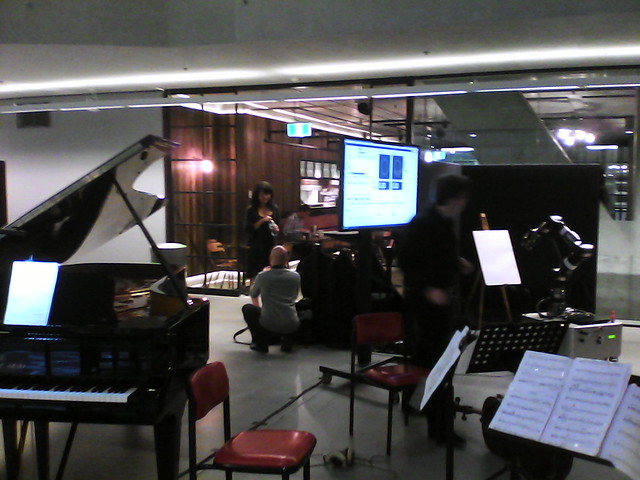 Greetings from the UTS Faculty of Engineering and IT Building in Sydney, where the Australia Piano Quartet is performing "Mendelssohn Meets Mechatronics". This is just outside the Penny Lane Bar and Cafe in the atrium of the building, with Broadway out the window.

For the second work two of the performers were hooked up to heart rate monitors (using Arduino computers) the output then set the tempo for the performers of Andrew Batt-Rawden's work Catharsis. The heartbeats of the performers where shown on a monitor, which was distracting, especially when one got down to 9.5 beats per minute (I suspect a fault in the equipment).

Through the performances a robot painted pictures with spray paint. This was distracting and did not be related to the works being played. Also the Dean Ian Burnett explained that the building has green lights outside powered by renewable energy.

The evening ended with a conventional rendering of
Mendelssohn’s stunning Piano Quartet Op.3, which was all the better for a lack of gimmicky gadgets.

Posted by Tom Worthington at 7:17 PM