The Luck of Politics by Andrew Leigh MP 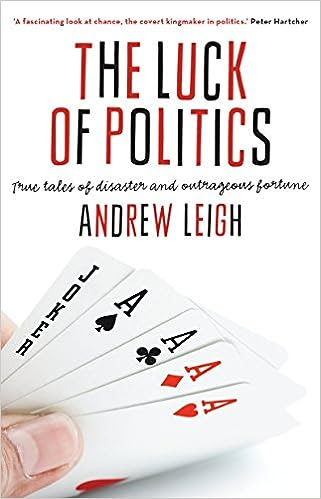 Greetings from the Australian National University in Canberra, where Andrew Leigh MP (and former ANU lecturer) is speaking on his new book "The Luck of Politics". Andrew was introduced by Senator Katy Gallagher. Andrew used an anecdote about how the Spanish Armada intending to invade England was blow off course. Perhaps an unfortunate story as the Australian Navy's largest ever warships were made in Spain to a design for the Spanish navy (still called the Armada).

Andrew presented amusing statistics about politics: politicians with shorter popular names are more likely to be elected. He had a serious point to the humor, pointing out that luck largely determines someones chance in life and the message was that we need social policies to redress the "bad" luck of birth. As an example, Andrew pointed out that the Australian nominations for OAs was "overly bureaucratic" and as a result favors males.

Andrew mentioned that entrepreneurs accept they will have failed ventures and have been known to put the name of one such venture on their number plate to remind them (like a Roman Slave whispering "Memento homo"). It happens today I was discussing the use of Star Trek in teaching, including using the  "Kobayashi Maru" test. in this Star-fleet Academy students are put in a no-win situation, so they can learn from failure.I might write this into my innovation course.


Andrew mentioned that the "Recession we had to have". It happens that one of my colleagues found the error at the ABS, which when corrected caused an economic boom.

The speech (and book) shows that Andrew Leigh MP has a sense of humor as well as deep insights. But only history will tell if these help, or hinders, his political career.
Posted by Tom Worthington at 6:37 PM