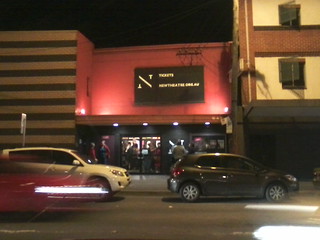 The Matilda Waltz opened this-evening at the New Theatre in Newtown, Sydney. The play is part of the Sydney Fringe Festival, but this was a very mainstream play, which would not have looked out of place any time in the New Theatre's history. Playwright Deborah Mulhall has Russell Drysdale on the side of the stage, painting.

Andrew Barton "Banjo" Paterson features through the first half of the play. The play covered the period before WW1, then WW2, and The Vietnam War. But after Patterson's death during World War Two, the play lost focus for me. Patterson was a correspondent in the Second Boer War and it would have made more sense as an epic, to cover that period and then end at WW2.

All the actors performed well with no sense of trying to remember lines (as can happen on opening night). The epic sweep swept a little too far and I wondered who these people were at the end and why I should care about them (and what Patterson and Drysdale were to each other). This is more a fault with the playwright, than the actors.

Posted by Tom Worthington at 8:49 PM