Wolf Lullaby at the New Theatre Sydney is Confronting But Worthwhile 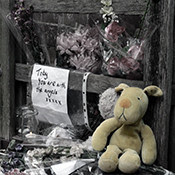 Last night's performance of the play Wolf Lullaby by Hillary Bell at the New Theatre Sydney was confronting but worthwhile. Allan Walpole's set is as stark of the story of a divided family in a small Tasmanian town coping with their child's apparent killing of an infant.

While that sounds a grim and unmatchable topic, it was far less unpleasant than the one and only episode of Game of Thrones, I have seen (on a flight from Canada). In that one combatant gouged out the eyes of another and then squashed their head like a melon. In contrast the violence in Wolf Lullaby is only hinted at.

The actors all acquit themselves well. For a change they do not have to try to put on American accents, as with recent New Theatre productions (which have a worrying trend of being about murders in small towns). It takes a little time to suspend disbelief and accept the adult playing a small child, but this works. The mother’s performance reminds me of Jackie Weaver. Unfortunately I can't tell you which actor played which role as Net Theatre does not include this information on their website.

The script of Wolf Lullaby is available from currency press. Wolf Lullaby is on at the New Theatre, Newtown, Sydney until 13 September 2014. If you are tired of mindless violence on TV then come along for some challenging, but thought provoking theatre.
Posted by Tom Worthington at 7:20 AM