James Cameron's Submarine Made in Sydney 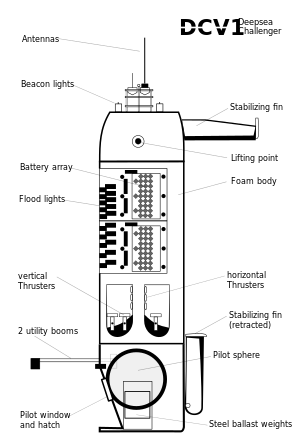 The one person submarine which James Cameron  used to film ‘Deepsea Challenge 3D’ was build in the inner Sydney suburb of Leichhardt. The Deepsea Challenger (DCV 1) is a 7.3 m tall, one person submarine built by Ron Allum's "Acheron Project", which was located in a street I often go past on my way to the local shops. With that project over, Ron Allum's Deep Sea Systems Pty Ltd has moved a few km to build deep sea submarines at the Sydney suburb of St Peters. The technology used has potential application in military and commercial Autonomous Underwater Vehicles (AUVs), as used in search and recovery Malaysia Airlines Flight 370.

Instead of a steel frame with components bolted on, the DCV 1 is made of a composite material (syntactic foam: glass spheres embedded in epoxy resin). The batteries, which make up a significant part of a submarine, are mounted within the foam. As this foam can be poured in a mould, it raises the possibility of relatively low cost, mass production of AUVs.

An AUV could be made by placing the electrical and electronic components (motor, batteries, sensors and computer) in a mould, connecting the cables and then pouring in syntactic foam to make the hull and hold everything in place. For military applications, this would have the advantage of a craft made mostly of plastic and so difficult to spot with a metal detector.

The Australian Department of Defence is planning to acquire up to twelve long range submarines, in the Collins-class submarine replacement project. Perhaps instead the ADF could acquire six smaller vessels equipped to launch and recover torpedo sized AUVs. These AUVs could collect information and some could also be equipped with a warhead to act as a torpedo or mine. The UAVs could travel into enemy waters, collect information and, if necessary, attack a ship. This would be a relatively low cost system, as when not used in an attack, the AUVs would be reusable.
Posted by Tom Worthington at 3:29 PM