Scale Up Stealth Trimaran for New US Destroyer 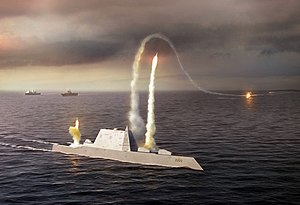 In "Clad in controversy" (IEEE Spectrum, August 2013), Drvis Schneider discusses the  new technology in the US Navy's first Zumwalt Class Destroyer, currently under construction. At 14,798 t, this is considerably larger than the Arleigh Burke-class destroyers (9,800 t) it was intended to replace. Controversial features of the Zumwalt-class include a  tumblehome hull for stealth, two long range Advanced Gun Systems, an 80 cell Peripheral Vertical Launch System and a deck-house made of a carbon fiber/balsa-wood sandwich. Perhaps most controversial is the purpose of the ship, which is for bombardment of the shore, in effect being a replacement for battleships.

The tumblehome hull slopes inwards to reflect radar signals up and away, making the ship more stealthy. But this may also makes it more unstable. The two advanced gun systems are designed for shore bombardment over 100 km, but this required design and development of a new gun and ammunition, unique to the Zumwalt Class. Such gun systems have in the past taken decades to work reliably (if ever). The launch cells for missiles will be placed around the periphery of the ship rather than as a cluster in the center as is usual. This is to ensure than a hit on one missile will not destroy the ship, but such a design is harder to engineer and maintain. The carbon fiber and balsa-wood sandwich deck-house is expensive to make and maintain may be a problem (later ships may revet to steel).

A better alternative might be a vessel about the same size, or smaller than current destroyers, with just one main gun and about 48 launch cells. An example of this is the Hobart class destroyer for the Royal Australian Navy. At 6,250 t this is half the size of the Zumwalt-class, but with With guided munitions the smaller ship's gun would have the same range as the Zumwalt. The Hobart class has a conventional hull and a radar reduction deck-house of conventional welded metal. About three Hobart class destroyers could be built and operated for the cost of one
Zumwalt-class ship.

For a more stealthy vessel the Australian designed Independence-class littoral combat ship could be scaled up from 2,307 t, to destroyer size. These ships have a partly tumble-home hull-form, but gain stability by being a trimaran. The hull and deck-house is made of conventionally welded metal, with no carbon fiber or other exotic material, so is cheaper and easier to build. The trimaran design results in a very large flight deck, with a reconfigurable area underneath. The interchangeable mission modules (fitted in standard shipping containers), already developed for the LCS, could be reused in a larger destroyer version.

Posted by Tom Worthington at 9:55 AM