What is War in the 21st Century? 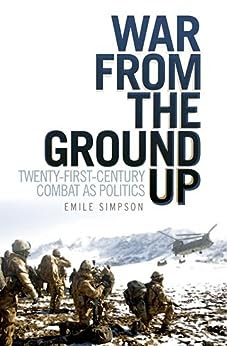 Emile Simpson, author of "War From the Ground Up: Twenty-First Century Combat as Politics", is  speaking on "The fusion of military and political activity in 21st Century combat". He started by discussing the nature of war,to achieve political ends through the use of force. This generally assumes two combatants. He argued that the information revolution has resulted in political fragmentation with many smaller parties with an interest. As a result the politics of war has to been considered at the tactical level, rather than strategic. The military commander has to consider the political effect of their actions, not just military. The domestic political effect of specific battles must be considered as well as the political effect on the groups which  make up "the enemy". Simpson's analysis seems reasonable, but nothing new, as these considerations have applied particularly in counter-revolutionary wars the UK has been involved in for hundreds of years.

Simpson then went beyond theory to discuss his experience in Afghanistan. He explained that traditionally the Army would assume that anyone shooting at them were "the enemy". But only a small number were committed members of "The Taliban" fighting Coalition forces, with many having only local tribal grievances or being militia, with no larger agenda. Locals would then use the coalition to attack their traditional enemies and militia using coalition resources but acting in their own interests.

Simpson then commented that Al Qaeda was now effectively operating as a franchise, which can't be countered with conventional military force. He commented that the French intervention in Mali distinguished
Al Qaeda from local gangs. Then there was a theoretical example, based on Somalia, where the pirates are not so much a political force as a form of organized crime.

Simpson showed a hypothetical political map of groups and the links between them. He suggested forming an assessment of the issues for each group (much like political poling). Issues can then be addressed to bring some of the parties on side. Groups which have an unacceptable agenda can then be identified and targeted militarily. The digram displayed reminded me of the visualizations used by police to identify key members of organized crime gangs and target them.


This politically nuanced view of warfare will make large demands on military commanders and forces on the ground. It is usual for senior military officers to receive some training in political matters, this is not usual for low level front line troops, at least not in western armies. This is something which would be much more familiar to the People's Liberation Army (PLA) of China and the
Vietnam People's Army. The problem for western armies is to consider a political context while respecting the conventions of liberal democracy. It may be difficult to ask soldiers to interfere in the politics of another country, but not their own. Also western armies have a tradition of keeping civilian political experts and politicians out of the details of planning and executing military operations. If politics are an integral part of operations, then the military has to allow more civilian involvement.

Simpson's analysis is not so much about a new and unusual approach to war, but the removal of a small anomaly where a few western countries have professional armies which stand aloof from politics, over a period of about 100 years.

In the Afghan conflict, and in contemporary conflicts more generally, liberal powers and their armed forces have blurred the line between military and political activity. The clear-cut conception that the use of force in war serves to defeat an enemy has been challenged by practices developed to deal with complex multi-player political eco-systems, in which the persuasive value of an action is as important as its military effect against an enemy. The consequent politicisation of tactical action is not new, but is nonetheless catalysed by the information revolution, and hence appears to point to the future of conflict.

This lecture will describe this evolution, using first hand experience from Afghanistan, and suggest that while a fusion of military and political activity is often necessary to be operationally effective in modern warfare, so too does this carry risks in terms on the broader delimitation between war and peace.

About the Speaker:
Emile Simpson served in the British Army from 2006-12 as an infantry officer in the Royal Gurkha Rifles. He completed three tours in Southern Afghanistan. He also served in Brunei, Nepal, and the Falkland Islands. He previously read history at Oxford University, and was a Visiting Defence Fellow there in 2011 on the Changing Character of War Programme.

He is the author of War From The Ground Up: Twenty-First Century Combat as Politics which has been described as 'A work of such importance that it should be compulsory reading at every level in the military' by Sir Michael Howard and as 'the most intelligent book on war I have read for a very long time' according to Sir Hew Strachan. ...

Posted by Tom Worthington at 5:48 PM