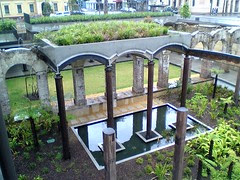 The Paddington Reservoir Gardens turned out to look disconcertingly like the digital architectural rendering. The gardens are worth a visit, if only for comparison with the Basilica Cistern of Istanbul. While more than a thousand years separate the two, it is remarkable how similar the design is (as they are both underground water tanks).

The roof of the 1880's underground water reservoir opposite the Paddington Town Hall was collapsing, so it has been partly removed to make a sunken garden. Part of the roof has been repaired and is available for cultural activities. Some of the vaults of the old brickwork have been retained to support some of the garden. Considerable effort (and money) has been lavished on the work (perhaps a bit to much money). The garden has the look of a digital rendering, with the sharp edges of the new steelwork just a little too precise and a little too designed. The patchwork of the cistern in Istanbul looks more genuine. But perhaps that takes a thousand years.

The Saturday Paddington Markets were disappointing, due to rain. Better was the foyer of the Chauvel Cinema in the old Padding Town Hall. This art house cinema is furnished in the style of a university student share house, with sixties velour couches. The cinema is currently showing Van Diemen's Land.

The architectural exhibitions at City of Sydney Library at Customs House is worth seeing. There are three levels of displays by young architects. The ground floor has "Testing Reality" with multiple representations of Harry Seidler's 1949 Marcus Seidler House. As well as traditional hand made wooden models, there was a Lego bricks odel, 3D digital printed plastic and one in PDF.

"Ulterior Motives" is a display of UTS architecture students proposals for sustainable development of the Ultimo Precinct around the university.

Least interesting of the displays was "Remodelling Architecture: Architectural Places - Digital Spaces" with some poorly executed digital works, reminding me of the cover of a cheap science fiction novel. One problem with all of the exhibitions was the lack of a web presence. For displays emphasising digital work, it is odd that there was no web address provided for any of the works directing the viewer for more details. This appears to be a failing in the education of architects in general. Even where there are architectural web sites, they tend to be so poorly designed as to be of little use.

A visit to Sydney's Paddy's Markets for some fresh produce ended the day. To get around to all those, I planned the journey using the excellent, Transport Info 131500. The buses ran as per the planner, but were surprisingly crowded for a weekend. The NSW Government clearly has failed to plan Sydney's transport and the system is near collapse, despite the advertisements currently running which claim improvements in timetables.
Posted by Tom Worthington at 11:10 AM