Mash-up Government Data to Save the World 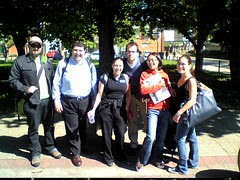 I met the GovHack team at the Purple Pickle Cafe at the ANU this morning. I am actually in Sydney for a Climate Change talk by Professor Lambeck, of the ANU Research School of Earth Sciences. The disturbing result from the extensive research presented by Professor Lambeck is that new models predict a larger rise in sea level than those used by the IPCC.

The situation with sea level rise due to climate change is much worse than previous thought. More and more prompt action will be required to address sea level rise than is being planned in current political processes. None of the proposals currently being prepared by government for the United Nations Climate Change Conference in Copenhagen December (UNFCCC CoP 15) are sufficient to avert a global disaster.

One technology we have to mitigate and adapt is the Internet. Because the Internet is already widely available and is being rapidly expanded, it can be deployed far faster than other technologies, such as new power generating stations, carbon sequestration or sea walls. One resource to be used is existing government data which the Internet can make available for climate change.

One area the Australian Government could provide data to combat climate change is with its $100M Smart Grid Project. The government could require the successful bidders to make the data available in real time to authorised users and in near real time freely to the general public.

Some other proposals I put to the APEC Climate Change Symposium in Canberra this week:

Posted by Tom Worthington at 10:47 AM