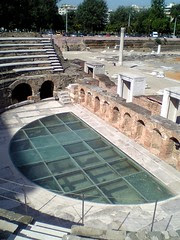 The Roman Forum is an archaeological site in the center of the modern Greek city of Thessaloniki. The site is free to visit, with useful signs in English and staff to ask questions of (and almost deserted when I visited). There is a Stoa (covered walkway) which was the site of ancient trade (the modern covered marketplace is a few streets down the hill and operated much the same way as this one did 2,000 years ago).

The roan forum itself is at one end of the Stoa and has been restored for performances. The remains of the original floor have been preserved in glass under the modern stage. Unfortunately several of the glass panels have shattered, hopefully a fate not shared by the New Acropolis Museum of Athens, which has an extensive glass floor.
Posted by Tom Worthington at 2:32 PM