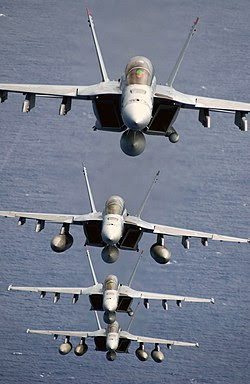 The Australian government is considering buying 24 F/A-18F Super Hornet fighter/attack aircraft. The Super Hornet is a two seat derivative of the F/A-18 Hornet currently in service with the RAAF.

The Super Hornet would be used as a stop gap due to a delay in the availability of the F-35 Lightning II Joint Strike Fighter. These are to replace the F111s due for retirement in 2010.

The F/A-18F is relatively new design, has the advantage of being proven in service but is not a stealth aircraft like the F-35. While the Australian plan seems to be to only order enough Super Hornets as a temporary stopgap, it may make sense to retain them to replace the older F/A-18s. Australian could then consider if F-35s are needed, or if their job could be better done with UAVs exploiting advanced computers and telecommunications technology.

Lockheed Martin have proposed an UAV derivative of the F-35, with a typical mission consisting of four unmanned JSFs controlled from two piloted F-35 or F-22s. Sensor information would be shared between the aircraft via datalinks. However, the F-35 and F-22 are both single seat aircraft, leaving the pilot little time to fly another two aircraft remotely. In contrast the F/A-18F has two seats, making it more feasible for one of the crew to control the UAVs.

Australia could also consider a mix of land based F/A-18Fs and F-35B Short Take-Off Vertical Landing (STOVL) aircraft based on the new Landing Helicopter Dock (LHD) ships, which are essentially small aircraft carriers. The F-35B stealth capabilities would complement the longer range of the F/A-18F.
Posted by Tom Worthington at 9:02 AM