Einstein's fridge an example for NICTA? 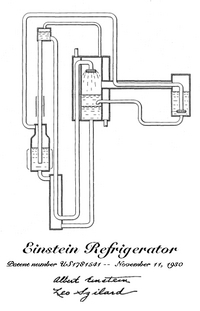 I wrote about an IT Innovation Seminar, in Canberra: The Challenges of Research in ICT:

Professor Bensoussan talked about the role of government funded IT research organisations, such as INRIA (the French research body he headed), in supporting national goals for industry development. He argued that INRIA had been successful in producing good fundamental research.

Professor Bensoussan is in Australia talking to NICTA and his comments were very relevant to NICTA. Like France, Australia had a blend of government and private organisations involved in research. It has provincial and national governments with diverging interests in economic development. It has to come to terms with the globalisation of industry and of research and development.

What was less convincing in Professor Bensoussan's talk was his argument as to the value of organisations such as INIRA and NICTA to their national sponsors. He argued the US "Stanford Model" of spinoffs from research into companies did not fit with the European approach to R&D. However, he was unable to point to a successful alternative in Europe, with IT research funded by government leading to industrial development.

This points to a major weakness in the Government strategy behind the development of NICTA. Essentially NICTA follows the European model: fund good research and hope it is of economic benefit somehow, some time. The result is likely to be the same as in the French case: the rest of the world will thank Australia for contributing to the overall increase in knowledge and then commercially exploit our research to sell products back to us.

We should not be surprised if NICTA fails to produce any economic benefit for Australia, if we fail to plan how to obtain such benefit. One alternative model is the "Cambridge Phenomenon", which I saw on a visit to the University of Cambridge (England). This model has the university actively involved in investment in startup ventures based on the university research. But it also has informal connections between the researchers and industry. A contributing factor is the limited tenure of the researchers, so they are forced to go out and set up a company after a time.

Whatever the model, we need one. All those conducting research at NICTA using government money need to be asked the question I ask every PHD candidate giving a seminar at the ANU: "How are we going to make money out of this?".

ps: Perhaps we can draw inspiration from Albert Einstein. While doing fundamental research he patented a refrigerator, which was licensed to European appliance makers, who paid royalties.
Posted by Tom Worthington at 9:13 AM