A few weeks ago I traveled from Colombo to Galle along the Coastal Line of Sri Lanka. The line follows the coast for about 100 km, sometimes so close to the beach that you can feel the spray on your face.

To plan the trip I used Seat 61 and booked through Visit Sri Lanka Tours. The tickets were at the Colombo Fort ticket office, as promised. However, the office took some finding, as it is not in the main hall of the station (where the local ticket booths are), but through a door to the left (when facing the building) on the outside. There was no one at the Colombo-Galle-Matara window, so after a few minutes I tried the one next to that and got my ticket (it might have been better to pay extra and have the ticket delivered to my hotel). The next challenge was to find the right platform and car, in the early morning commuter rush.

After asking a few people I ended up in the right place. I had booked the 1st class observation car, which was "air-conditioned". The car was far from new and the air conditioning was an electric fan on the roof. But it was only one quarter full, and had a clean toilet, which is luxury on any form of Sri Lanaka transport. There was a large window on the end of the car (with one pane cracked), providing an excellent view of where we had been, plus opening widows on each side. 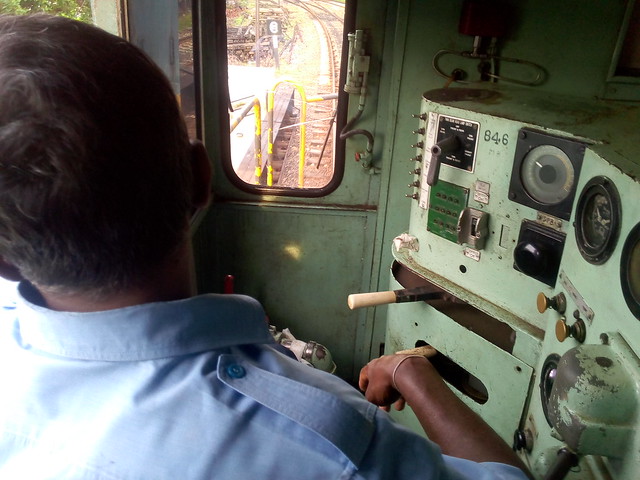 One problem is the large number of people bothering you. I had someone at my seat asking for a donation to an orphanage (chased off by the conductor). Someone in a blue shirt then asked if I would like to see in the locomotive. I thought this was yet another tout, but it turned out to be the driver. So I got to see the driving cab of the locomotive. I was worried this might distract the driver from preparations, but there was a second crew member in the cab. 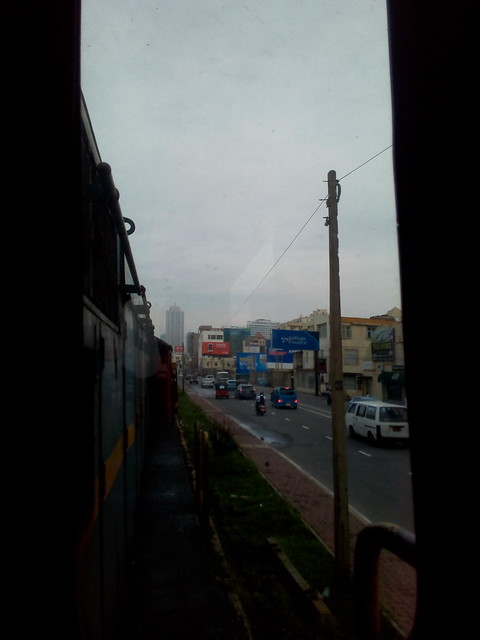 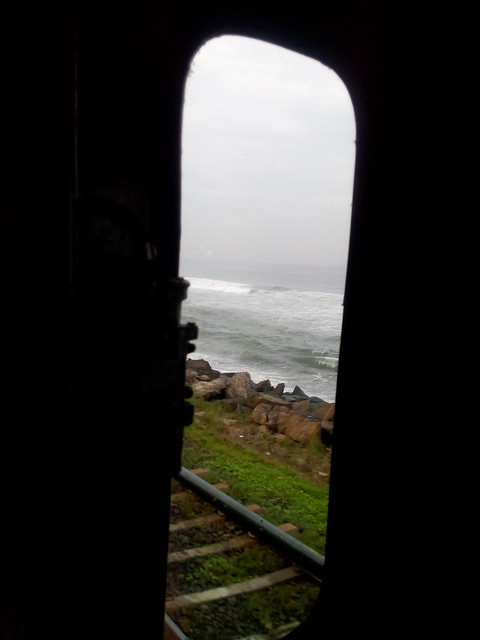 The track goes though the city in a cutting, then out to the beach, just past Galle Face Green. On one side is the coastal road and on the other the beach. There were  people causally strolling across the track, as well as Tuk tuks. However, it is clear they know ever inch of the track, every bump (there are many) and where to expect problems. 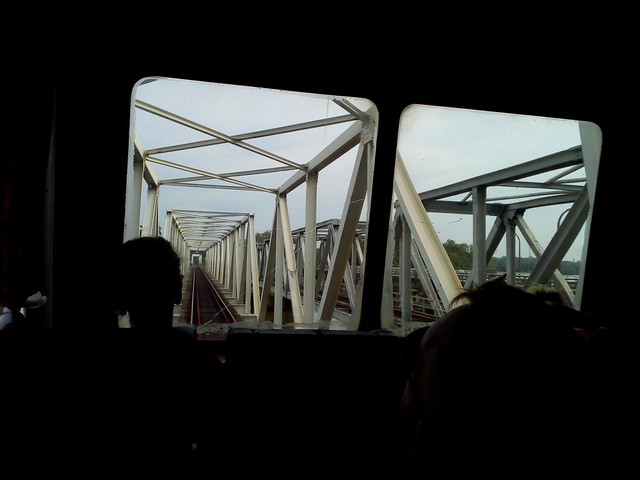 While the coast with villages and fishing boats is impressive, I was more interested in the rapid development evident on the landward side.

The passengers are mostly foreign tourists. There are the a few seasoned backpackers. One provided a running commentary which was a little disconcerting at times, pointing out this is the line with the worst rail disaster in world history, when the 2004 tsunami derailed a train. 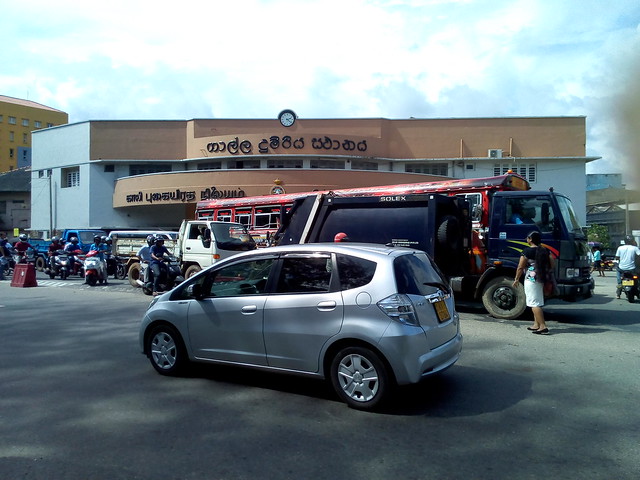 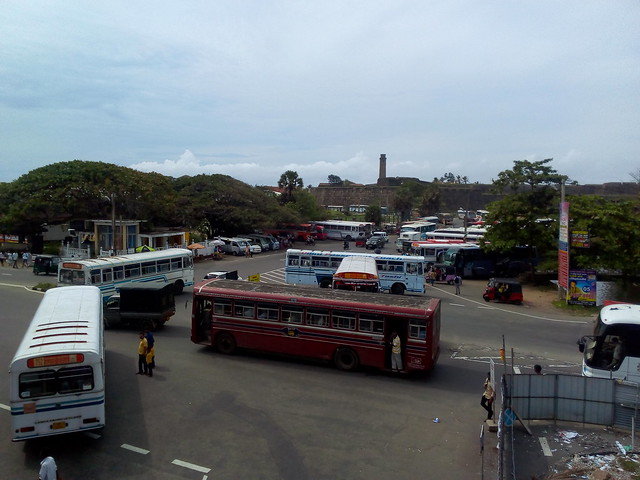 After a comfortable journey, the train arrived on time at Galle Station, an impressive slightly Art Deco looking building. Getting from the station across the busy road to  Galle Fort proved difficult. I tried the foot-bridge over a creek to the bus terminus, but then could not find how to get across the road. Back across the footbridge and on the other side of the station I found a crossing. This lead to Darmapala Park, which has a bridge to the Fort, but I decided to take a shortcut along the road (dodging past the many parked buses). 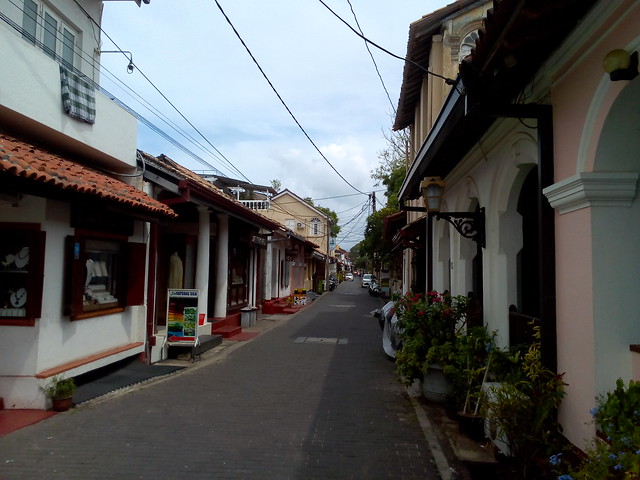 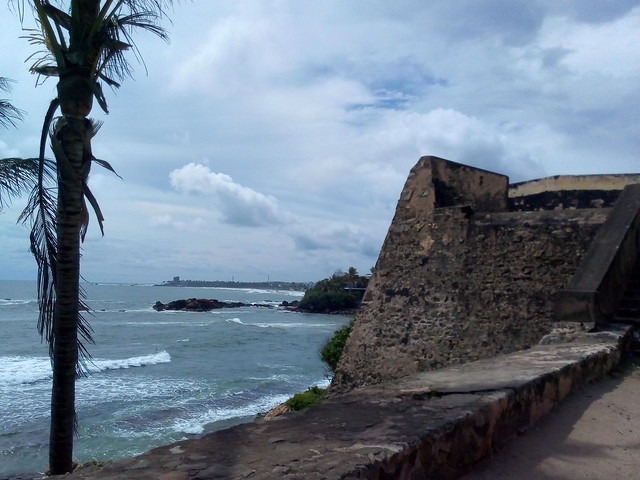 Galle Fort is an impressive structure and large enough to spend a day wandering around. The Galle National Maritime Museum (also devastated by the 2004 Tsunami), provided a break from the heat. The building is almost as interesting as the exhibits, being part of the fort wall. I walked around getting blisters, while turning down numerous offers of Tuk Tuk rides.

After wandering around I had a quick drink in the hip little Old Railway Cafe, overlooking the station. It was then a short walk back to the station, where I bumped into the driver, who pointed out that his locomotive was changing ends and the observation car would be at the front. 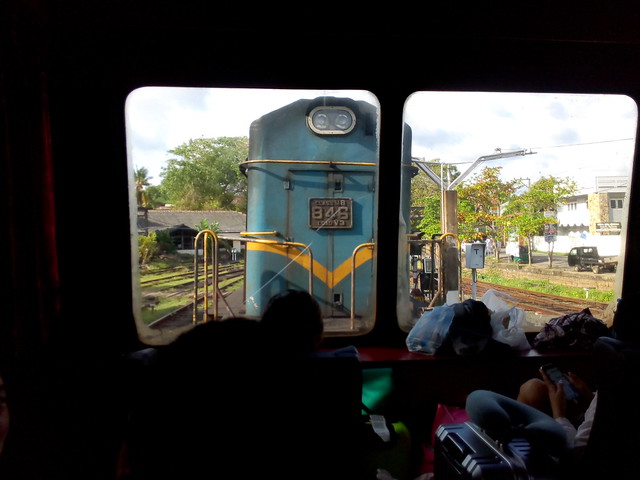 The observation car's end window was now partly blocked by the locomotive. But there was still a good view to ether side. As we rattled along, there were twilight views of people fishing, boats on the beach, and fish for sale at town markets (so close I could smell them). Sitting next to me was a local, who introduced themselves as a guard on the Viceroy Special steam train tours, asking if I knew Scott McGregor.

Despite the twilight, and my entertaining companion, th the trip back was an uncomfortable two hours. The locomotive was belching diesel smoke. It might be a good idea making the trip one way, from Colombo to Galle by train, and come back another way.

As the train pulled into Colombo Fort there was a tropical downpour, and I got back to my hotel sopping wet. Outside my balcony there was a train going past. That makes for a complete day of train tourism in the tropics. ;-)
Posted by Tom Worthington at 6:16 PM