Back to the Future Day: How Much is Now Real? 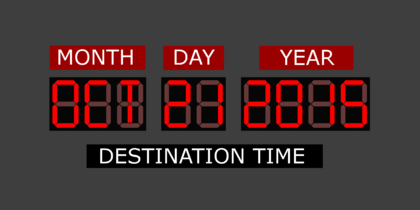 Some clever marketing person created "Back to the Future Day" to mark the day October 21, 2015 depicted in the 1989 movie "Back to the Future Part II". There were numerous media reports on how much of what was in the movie is now real. The biggest mistake in the move was the prevalence of fax machines, which have all but disappeared. Perhaps the biggest success was the depiction of a home with numerous large flat screen displays and video calls.

Now have and use:
Have but don't use much:
Don't have:
ps: The ANU built a hover-board for the day.  I made one of these in my youth, from a truck inner tube, sheet of plastic, a board, roll of duct tape and an industrial vacuum cleaner.
Posted by Tom Worthington at 8:45 AM

Email ThisBlogThis!Share to TwitterShare to FacebookShare to Pinterest
Labels: Back to the Future Day, science fiction