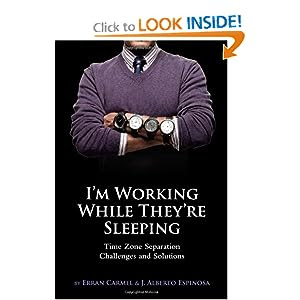 (Nedder Stream Press, 2012, page 13). They also describe Nomadism as "working anyplace. Many nomads work in cafes, in 'third places' not their home or office". The authors suggest as a result each person is in their own timezone. They emphasize this as a way of working for technology workers.

But I suggest this way of working is not new, or unusual: it has been the normal way of working for most of human history. It is only the relatively recent adoption of the clock and the office which makes it seem unusual. Many occupations never had a set place and time. The adoption of the Internet simply allows knowledge workers to return to the usual way of working, which is not at a particular place or time.

The "Technologies to Support Collaboration across Time Zones" are discussed by Erran Carmel, along with Rafael Prikladnicki, Sabrina Marczak and Christof Ebert (in "Software Engineering for Compliance" May/June 2012). The authors use the term "scattertime" to attempt to overcome the dichotomy of synchronous versus asynchronous communication tools. Unfortunately the authors seem to have got themselves into a muddle, by failing to clearly define these terms.

The term synchronous has a meaning in everyday language and in computer science, which is far different to the way it is used in this paper (and by the online learning community). If the term is used in its original sense, then there is no dichotomy to overcome and "scattertime" ceases to be a new and scary concept, but just a normal part of everyday life.

It should be noted that the term "scatter time" is used in a different sense in computer science, as a measure of how long it takes to divide a task up in a parallel processing system. There is then a "gather time" to collected the results of processing.
As an example Figure 5. "Execution time of the Broadcast, Scatter, Gather collective for a 2.7GB file to a varying number of nodes" in "Towards MapReduce for Desktop Grid Computing":

"The broadcast, scatter, gather results are presented respectively in the Figure 5. The time to broadcast the data linearly increases with the number of nodes because nodes compete for network bandwidth, and using BitTorrent obtains a better efficiency than using FTP in the same number of nodes. With respect to the gather/scatter, each node only downloads/uploads part of all chunks, and the time remain constant because the amount of data transferred does not increase with the number of nodes."

Posted by Tom Worthington at 4:38 PM